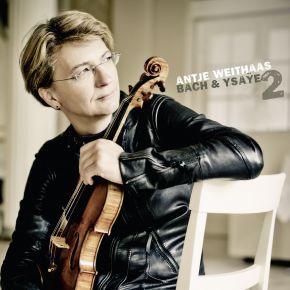 Youthful experiments vs. mature wisdom Vol. 2
Vol. 2 of Antje Weithaas‘ Trilogy with works of the two cycles. It was Antje Weithaas’s own idea to jointly record Johann Sebastian Bach’s six sonatas and partitas for solo violin in conjunction with Eugène Ysaye’s six solo violin sonatas. “The works by Bach are rather well-known”, she remarks. “But what about the Ysaye sonatas? Ysaye is invariably shoved into the virtuoso corner, but as a composer he is to be taken quite seriously!” - Now the No. 2: On the second CD in her Bach-Ysaye-trilogy, Antje Weithaas follows a path from darkness to light.
J. S. Bach‘s Sonata in A Minor resembles a sacred passion without words; Ysaye’s dramatic Third Sonata is entitled Ballade, and the first movement of Ysaye’s Fifth Sonata evokes a sunrise (L’aurore ). The CD closes with Bach’s Partita in E Major! “This work is the simplest one in the entire cycle of sonatas and partitas. I don’t mean ‘simple’ as ‘easy to play’, but in terms of its musical statement: here, Bach chooses the majestic, positive key of E Major.”
„ ….Nevertheless it is particularly exciting and refreshing to hear Weithaas in true isolation with her beautiful and varied tone (on her modern Greiner violin which she plays with extraordinary skill of compensation, exspecially when maintaining the heavy poise of the Chaconne) and absolutely meticulous technique. Most of all, you can hear her complex thinking clearly evidenced in the light but ever-present dance lilt in all Bach’s movements, despite their musical and intellectual gravities. …..“ (The Gramophone, March 2015)