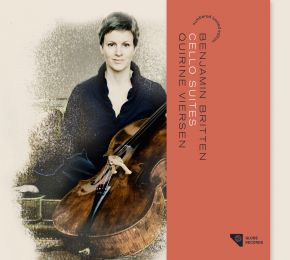 This release of the Britten Cello Suites follows Quirine Viersen’s successful album of the Bach Suites. The album is a tribute to the artist’s good friend and producer Paul Janse, who passed away two years ago. Dutch cellist Quirine Viersen is one of the leading musical personalities of her generation. Her intense and virtuosic playing has convinced the public, the press, and her colleagues of her special musicality. She has shown broad insight in classical music literature with her concerto and recital performances as well as her festival participation. Viersen has been awarded numerous prizes at international competitions, the most important being the Young Artist Award in 2000 which was presented to her by the Credit Suisse Groupe. Viersen plays a 1715 Joseph Guarnerius Filius Andreae, provided by the Dutch National Instrument Fund.

Benjamin Britten (composer)More information
15-03-2017 ARG
"(...) She also expresses certain elements—particularly the slides in Suite 3—with humor that balances the angry attitude necessary for much of this music. Her intonation is excellent as well. (...)"
19-10-2016 Edison nomination
"From the jury report:
"This cd radiates from all sides the immense care and good taste that Quirine Viersen has in her approach of the three suites for cello solo by Benjamin Britten. Her meticulous performance takes you with her to another world.""