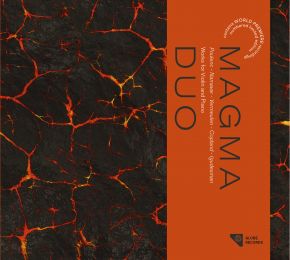 Works for Violin and Piano

The Magma Duo took their name from one of their favorite pieces: In de magmakamer (In the magma chamber) by Reza Namavar, that was written especially for them. Although equally at home with music by Beethoven and Frank, their first album features only 20th and 21st century music, ranging from the popular Poulenc Sonata recording to recording premieres of Aleksey Igudesman’s irresistible 2nd Violin Sonata and the Namavar piece. The Magma Duo’s fiery musical temperament makes for a spellbinding album, that will engage listeners regardless of their musical tastes. In 2014, the Magma Duo won the first prize in the senior category of the “A Feast of Duos!” international competition for violin-piano duos in Sion, Switzerland. According to judges, the Magma Duo convinces through its ‘energetic playing which evokes reactions.’

The Magma Duo has assembled an interesting program.