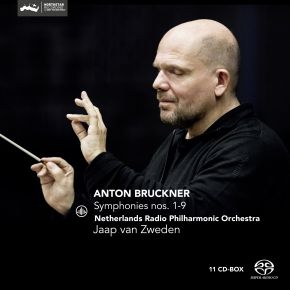 This release, containing all nine of Bruckner’s symphonies, is one of Challenge Classics’ greatest achievements so far. The quality of the performances- by both conductor and orchestra- and of the recordings makes this Bruckner’s complete survey a primary reference for anyone interested in such repertoire. Each one of these symphony recordings has received positive press. Of the Seventh: “Conductor and orchestra bring out the structural and thematic complexity of the final movement, in a fine end to another very strong and recommended performance.” (Classical Net Review) Of the Third: “This is a resplendent addition to an important cycle in the making.” (Gramophone) And of the Sixth: “Exceptional engineering achieved by Challenge Classics, with natural-sounding timbres and an extremely realistic sense of acoustic space.” (International Record Review) Jaap van Zweden has risen rapidly in the past decade to become one of today’s most sought-after conducto

Netherlands Radio Philharmonic Orchestra (orchestra)More information
21-09-2017 Fanfare Magazine
"The New York Philharmonic will serve as an ideal platform. Already I find him a superb Brucknerian, and if he continues in the same vein, his fame should be assured."
13-10-2016 Opus Klassiek
""Van Zweden's version gives a special attraction to the slow part, where he is stronger than most of his colleagues, he knows how to get the melancholic interpretation in the spotlight.""
01-10-2016 De Volkskrant
"four star rating (****)

"He paints colour with a fine brush. Climaxes stay in balance.""