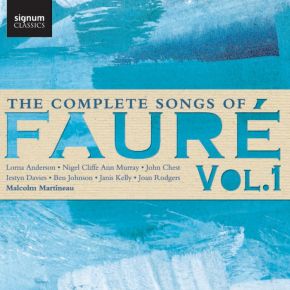 The Complete Songs of Fauré, Vol. 1

Some of the UK’s best singers come together for this album, which is the first release in a series profiling the complete songs of Gabriel Faure. Pianist Malcolm Martineau heads up this project, performing beautifully. This release follows his critically acclaimed series of The Complete Poulenc Songs. Vocalists featured on this release include Lorna Anderson, Nigel Cliffe, Ann Murray, John Chest, and more.