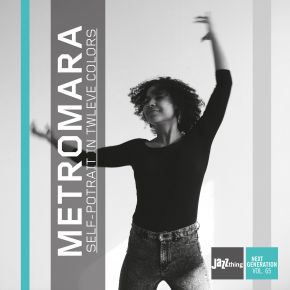 “Metro stands for the metropolis of Amsterdam, where we got together, and Mara, well, that’s me,” Mara Minjoli explains. And the title of her debut CD says it all. This alone already proves that the singer wants to fulfill her dream of cross-genre music without purist dogmas. The best of what she likes, actually something to be taken for granted for the 19-year-old born in Bochum, Germany. “I like Stevie Wonder, Charles Mingus, Erykah Badu, Lauryn Hill, Carmen McRae, Joni Mitchell, and the Australian band Hiatus Kaiyote. I also like traditional jazz, soul, hip hop, R’n’B, and electronic music. Each element has influence, encouraged and inspired me musically. There is nothing that I want to exclude.” What other choice is there than to combine it all somehow? “I always considered us as a live band until now,” Mara confesses. “Because each individual player radiates tremendously strong energy. But working on the individual songs in a studio has definitely