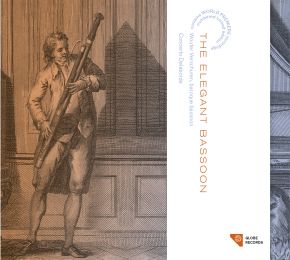 Dedicated entirely to the baroque bassoon The Elegant Bassoon features a rich variety of repertoire dating from the earliest days of the instrument’s existence, until the period in which the classical bassoon took over.
Bassoonist Wouter Verschuren and Concerto Delaborde here present the instrument in exciting unusual ensembles, like bassoon and traverso or viola da gamba. The reason that these combinations of instruments were not used often in the past, lies in the fact that traverso and viola da gamba favor keys with sharps, such as D major, whereas the bassoon favors keys with flats, like F major. This album contains 6 world premiere recordings.

Kathryn Cok on harpsichord & organ,  Wouter Verschuren on dulcian and Adam Woolf on trombone of the Caecilia Concert invited for their new baroque project and CD 'Schmelzer & Co' three guest musicians: Bruce Dickey: cornetto, Bjarte Eike: violin and Antina Hugosson: violin & viola'Schmelzer and Co' is a wonderful blend of music which was played at the Habsburg Court where composers like Schmelzer, Fux, Neri, Bertali, Muffat and others ...

Though the bassoonist delivers a stellar account of the Sonatina Quinta in a minor, it is the Sonata a 4 in d minor from Tafelmusik that is the CDʼs highlight.