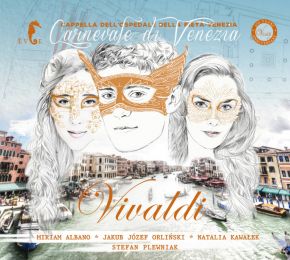 Carnival in Venice, the event people are talking about throughout Europe, is indeed the accumulation of the numbers of games, which were allowed to be played only in that season, unless there are other special reasons for celebration. In this sort of entertainment, we can enumerate comedies, operas, casino games, ballet, parades, bull fights, tightrope dances, puppet shows, and jugglers' performances. At that point in the celebration, everyone is allowed to wear masks all day long. In the old days, the carnival would start on the second day of Christmas and go throughout the beginning of the new year. The reason this was eventually postponed by officials was concern for public safety and the fact that many people were using masks as disguise to commit crimes. This release is to celebrate not only the carnival but also the works of Antonio Vivaldi. The form of Venetian opera was evoked by the baroqu eaesthetics: it demanded richness of impressions, diversity, contrasts, su

Is there a chance that you could tell me who is singing on which track. Your booklet does not appear to say. The record is very, very good! Many thanks

01-06-2017 Opernglas
"The opera arias are well chosen and make curious about the recently rediscovered opera composer Vivaldi. The sound of the three beautiful voices are very flexible and suitable for this passionate and fiery music."
15-03-2017 kultur-online
"Under the leadership of its initiator Stefan Plewniak the young woman orchestra is spraying  not only a lively carnival mood, but let also space for quiet emotions and gentle melancholy."
24-02-2017 Opera Nederland
"Because of the debut album of Jakub Józef Orliński an interesting issue. We will hear more of him in the future!"