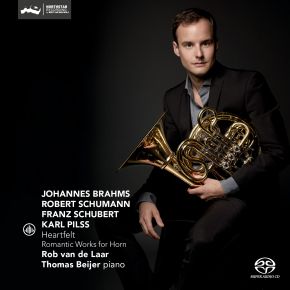 Rob van de Laar, 29 years old, is the Principal Horn of the Mozarteum Salzburg. This being his first solo album, he chose the great music of the German Romanticism for horn. Brahms' Trio was composed in 1865, during a peaceful summer at Clara Schumann's house in the Black Forest. The Adagio and Allegro by Schumann was composed in 1849 and is one of a series of miniatures for different solo instruments and piano written by Schumann in Dresden in 1849. Schumann was among the first to explore the expanded possibilities offered by the new valve horn. Schubert wrote his son gAuf dem Strom in 1828, the final year of his short life, to a text by Ludwig Rellstab. It was written for a concert at the Vienna Musikverein, marking the first anniversary of the death of Ludwig van Beethoven on March, 26. Schubert, who was a great admirer of Beethoven, saw his opportunity to compose a special song as an ode to the master. He added a dazzling horn part here. The composer Karl Pilss is perh

The Edison Nominations have been announced. Dutch pianist Hannes Minnaar has been nominated for the Edison Audience Award with his Gabriel Faure album. You can vote for this album: here Furthermore horn player Rob van de Laar has been nominated in the Category ' The Debut' with his album 'Heartfelt' and conductor James Gaffigan and the Radio Philharmonic Orchestra in the Category 'The Orchestra' for the album with Prokofiev's Symphonies 1 & ... 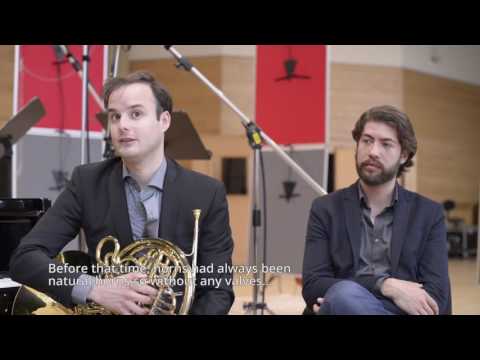 "
20-01-2017 Luister
"The Dutch Music Prize, a debut CD, a 'concertfilm' in the making ... The career of horn player Rob van de Laar is progressing well."
16-01-2017 NTR Radio 4 Plaatpaal
"Plaatpaal on Radio 4"
07-01-2017 HR Audio
"An altogether promising debut by a van de Laar, still on the way up, and greatly helped by his colleague musicians and, need it still be said, an exemplary recording by North Star Recording Services in the famous facility of the Galaxy Studio in Mol, Belgium."
06-01-2017 Trouw
"Hornplayer makes his instrument sing"
05-01-2017 Eindhovens Dagblad
"The award of the Dutch Music Prize brings a lot of commotion in his already busy life. However Rob van de Laar has no choice: with music, and the horn in particular, lies his heart."
04-01-2017 Reformatorisch Dagblad
"Bugler Rob van de Laar (1987) will recieve the Nederlandse Muziekprijs in Maastricht this Thursday."
03-01-2017 De Limburger
"bugler Rob van de Laar wins the music price"
03-01-2017 Tilburgers
"Philharmonie Zuidnederland and bugler Rob van de Laar playes Brabants new years concerts."
02-01-2017 NRC Handelsblad
"''Listen and let yourself be fascinated.''"
02-01-2017 Nu.nl
"''Bugler Rob van de Laar, who receives the Nederlandse Muziekprijs Thursday, feels 'a strong moral duty for the title'.'' "