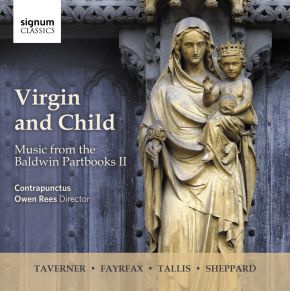 Early music consort Contrapunctus returns on Signum for their second release in the series centered on music of the Baldwin Partbooks. John Baldwin was a member of the choir of St. George's chapel, Windsor, and his transcriptions during the 1570's and 80's create one of the greatest surviving collections of Marian polyphony, composed during the reigns of Henry VIII and Mary Tudor. This volume explores texts celebrating Mary as Mother of God, and on the Virgin and her child. Contrapunctus, led by Owen Rees, couple powerful interpretations with pioneering scholarship. Currently Vocal Consort in Residence at Oxford University, the ensemble's first two recordings, Libera nos and In the Midst of Life, were both shortlisted for the Gramophone Early Music Award.