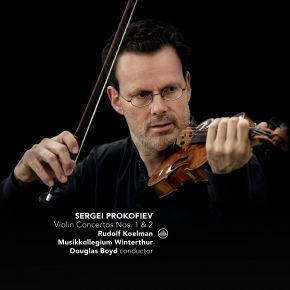 During the summer of 1917, whilst the first World War was raging, Sergei Prokofiev found inspiration for his first Violin Concerto, Op. 19, during walks through the fields. This concerto’s premiere in Paris did not take place until 1923. The Parisians found it “harmless” and “old-fashioned.” Despite putting all violinistic techniques to the test, the work indeed features a distinctly lyrical character. Even if Prokofiev resisted reproaches made against the style of this work, he nonetheless paid heed to them: in the works written immediately after this concerto, he adopted a markedly more modern pace. Unlike the first concerto, the second one was not written in the idyll of nature, but during Prokofiev’s nomadic phase in 1935 between Paris, Voronezh, Baku and Madrid, where it was premiered: “I wanted something completely different from the first one, in terms of both content and form.” Whereas many listeners are reminded of spring-like feelings in the first

Sergei Prokofiev (composer)More information
Douglas Boyd (conductor)More information
Musikkollegium Winterthur (orchestra)More information
16-10-2017 Music Web International
"the more you listen the better this gets"
12-07-2017 Nieuwe Noten
"The whole sounds vibrant, powerful and diligently."
01-07-2017 Fono Forum
"This he does by sovereign manner, and sometimes one is inclined to something of the polished brilliant Heifetz playing out from his style to hear."
19-06-2017 Kerk en leven
"The first part is a dreamy andantino with a beautiful melody as the main theme. The third is a kind of natural idyll, largely lyrical in nature, which can cause spring-blowing feelings. The middle part is faster, with occasional grotesque rhythm changes and contrasts."
26-05-2017 Gramophone
"Koelman has more of the character"
19-05-2017 Luister
"He is so absorbed in the orchestra that his Stradivarius completely dreams away in a kind of tree full of melodious birds - now melancholic, then all together again loud chirping"
03-04-2017 Pizzicato
"