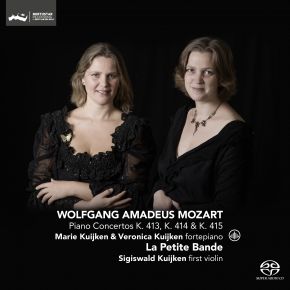 Mozart conceived the 3 piano concerti KV 414, 413, and 415 in 1782, one year after he had settled in Vienna as a more or less free-lance musician. From onset, his idea was to get these works published; he obviously expected a positive response from the public, not only on the financial level but also as a composer and piano virtuoso. In order to enhance the attraction for his publication, he decided to write these concertos in such a way that they could be performed not only with full orchestra, but also with a reduced accompaniment of only string quartet. Clearly, Mozart did not consider this strategic starting point as an artistic limitation, but rather as a challenge: in fact, already the score without the wind parts should leave nothing to be desired. This resulted in a very careful and beautiful string writing, matching the solo part in the most effective and intimate way. The wind parts were then conceived to accentuate and “color” certain passages in the accompaniment with even more depth. For this recording, Sigiswald Kuijken replaces the cello with a double-bass as its role is purely that of a basso continuo. This is a new and exciting release in the discography of La Petite Bande.

La Petite Bande (orchestra)More information
Veronica Kuijken (soloist)More information
Marie Kuijken (soloist)More information
31-01-2018 Music Web International
"A superb performance, and recording – which sounds perfectly fine even on my bog-standard CD player"
01-12-2017 BBC Music Magazine
"A feeling of gentle, cultivated musicianship pervades the disc's 74 minutes, which anyone already familiar with its contents will appreciate."
01-07-2017 Concerto - DE
"Already the used fortepiano is sensational!"
16-06-2017 Kerk en leven
"More than pleasantly surprised by the sober and at the same time clever interpretation of La Petite Bande."
01-05-2017 Stereo & Fono Forum
"The result can be completely convinced, as the balance is perfect and musical as well as cast from a single mold."
24-04-2017 Klassieke zaken
"Really something for lovers of old Instruments. You are spoiled with three piano concerts, but not the usual versions."
04-04-2017 Kerk en Leven
"Fresh played without compromise and yet very pure, very beautiful expression but quite bland sentiment, in a few words: fresh and crispy!"
03-04-2017 Pianist
"(...) Everything fits perfectly or complete each other, and the strings are mostly an essential energy source of the music. (...)"
01-04-2017 Concerti
"The chamber musical approach is the big plus of this SACD"
08-03-2017 Pizzicato
"

Vivid and beautifully shaped performances. The recorded sound is warm and well balanced.