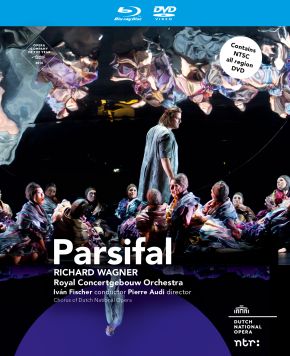 Iván Fischer makes his DNO debut. He conducts the Royal Concertgebouw Orchestra. Pierre Audi, artistic director of DNO and the Holland Festival, directs his first new DNO production since Saint François d'Assise (2008). For Parsifal Audi once again joins forces with the British sculptor Anish Kapoor (décor). Alejandro Marco-Buhrmester previously sang the role of Amfortas at the Opéra National de Paris and the Bayreuther Festspiele. Kurt Rydl (Titurel/Klingsor) made previous DNO appearances as Hagen/Hunding in Der Ring des Nibelungen and as Heinrich in Lohengrin. Kurt Rydl has been an honorary member of the Wiener Staatsoper since 1999. Falk Struckmann has frequently sung the role of Amfortas, but now makes his first DNO appearance in his role debut as Gurnemanz. The title role is sung by Christopher Ventris, who previously appeared at DNO as Steuermann in Der fliegende Holländer. Petra Lang (Kundry) previously sang Brangäne in Tristan und Isolde and Venus in Tannhäuser at DNO.

Operalively.com: There were no weak links in the cast. Amfortas sounded suitably pained, very wobbly vibrato for it, but this very much worked. Gurnemanz was stoic and powerful. Klingsor was a rounded and full bass. Kundry has a truly bewitching voice, very powerful. Parsifal was definitely the stand out, always rising above the orchestra, his voice conveyed each emotion perfectly but was always perfectly clear and pure. Ivan Fischer’s interpretation is calm, subdued, crystal clear, chamber-like. It is generally brisk, but extremely flexible, and follows Wagner’s tempo changes to the letter. Nonetheless, one cannot help but be carried along with the waves of music, so that the final chords are absolutely overwhelming. The Concertgebouw, characteristically played stupendously. Beautiful phrasing, incredibly unity, and they just sound so incredibly beautiful.

What are the technical specs for the audio and video on this Parsifal?

21-12-2017 Cutting Edge
"No. 16 Cutting Edge - Classic under the Christmas tree: the 17 of '17"
06-10-2017 Luister
"together with the singers, they have made a wonderful and fascinating performance"
17-09-2017 BBC Music Magazine
"Iván Fischer is capable of great things, and with the Royal Concertgebouw Orchestra in the pit there are bound to be some wonderful sounds in this subtlest and also most piercing of Wagner's scores."
10-09-2017 Opernglas
"

"
20-08-2017 Gramophone
"Well filmed and recorded, this is an essential purchase for Lang and for Audi's direction, a straight but strong rival to existing competition"
04-08-2017 Klassieke Zaken
"Iván Fischer leads the Concertgebouw Orchestra with a chamber musical sophistication"
17-07-2017 Opus Klassiek
"The presentation of this edition is exemplary, and not just by combining a Blu-ray disc with a regular DVD."
01-07-2017 Opera lounge
"Iván Fischer with the Royal Concertgebouw Orchestra Amsterdam, the wonderful dark sound in many colors shimmer and supple agogik take, in short, is the real star of the performance"
08-06-2017 SWR
"(The dvd) show many camera perspectives, often close-ups, each significant facial expressions, virtually any thoughts. Almost like in a movie! Great pictures! In the transformation of music remains of the spectators to the action: here show film projections the paths of Parsifal and Gurnemanz: blurred and fuzzy - suitable for music."
11-05-2017 AVROTROS
"An imaginative show, full of enchanting scenes and impressive images that you will never forget."