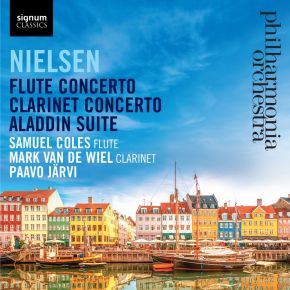 After completing a quintet for wind instruments in 1922 that would become one of his most celebrated works, Carl Nielsen hit upon the ideas of writing a full orchestral concerto for each of the instruments included in that quintet. Nielsen certainly unlocked something in those five individual instruments that few composers had before him o rindeed would after. 'Now I think on the basis of instruments themselves...in a way I creep into them' he wrote around the time of the quintet; 'it can surely be said that instruments have a soul'. The two concertos of the planned five that did materialize - for flute and clarinet - certainly echo those sentiments. The Philharmonia Orchestra is one fo the world's great orchestras. Widely acknowledged for its pioneering approach to the role of an orchestra in the 21st century, the Philharmonia leads the field for the quality of its playing and its innovative work with residencies, music education, audience development and the use of new technology to reach a global audience.

Here we have truly gripping performances of Nielsen’s Flute and Clarinet Concertos, with magnificent sound textures from the soloists as well as from the orchestra. The program ends with the Aladdin Suite from the dramatic, coloured incidental music in a dynamically vivid performance under the expert baton of Paavo Järvi.