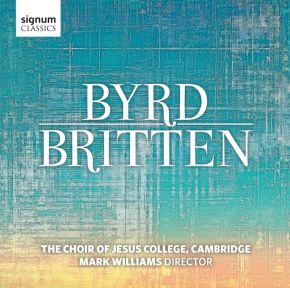 Led by Mark Williams, the Choir of Jesus College, Cambridge continue their critically-praised series of recordings on Signum with this new recording of works by British composers Benjamin Britten and William Byrd. Byrd and Britten, their respective careers separated by about three hundred and fifty years, share one very significant characteristic. They were both, in quite different ways, outsiders. As a devout Catholic existing within an alien environment - a state which ultimately viewed Catholicism as the equivalent of sedition - Byrd was obliged to pursue a kind of double life, expressing his spiritual exile in music of emotional intensity. Like Byrd, Britten became highly regarded by the establishment for his artistic achievements, but reservations regarding his homosexuality prevented his complete acceptance. Both his pacifism and his sexual orientation made him an outsider.