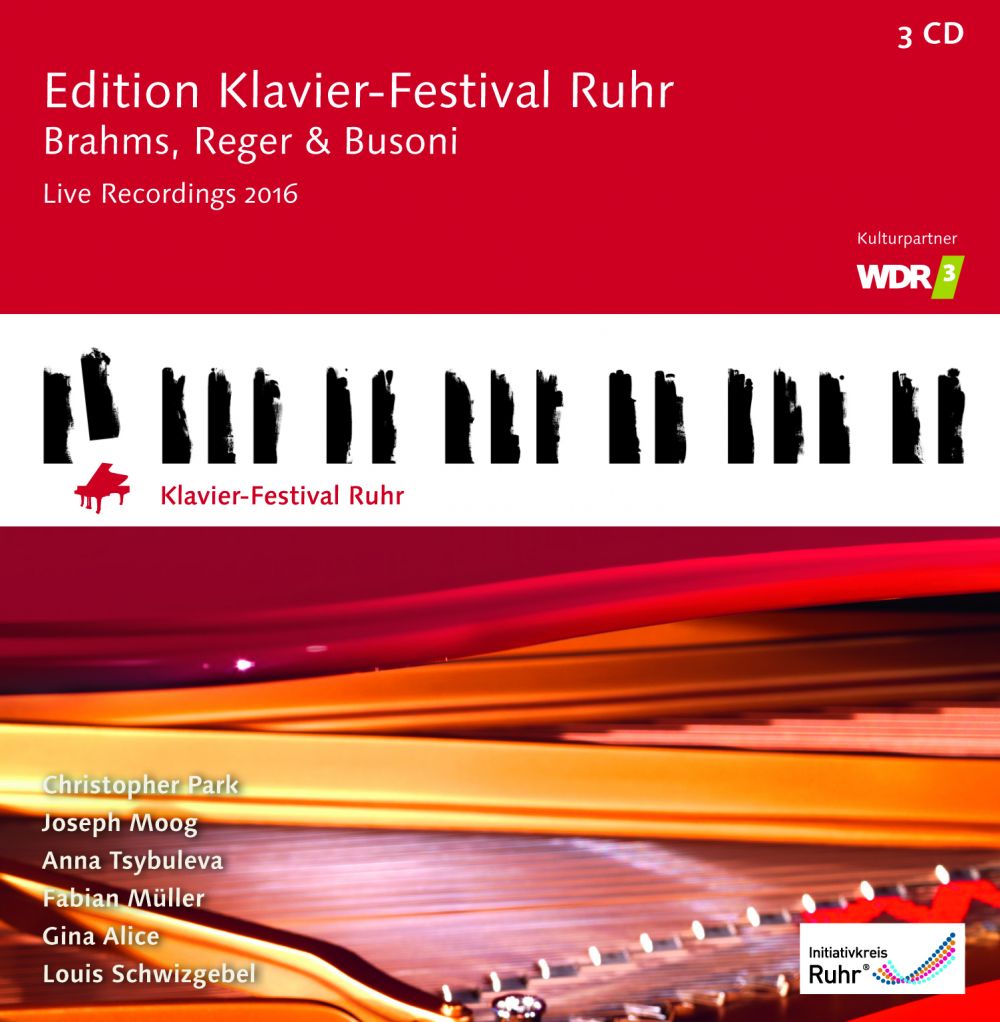 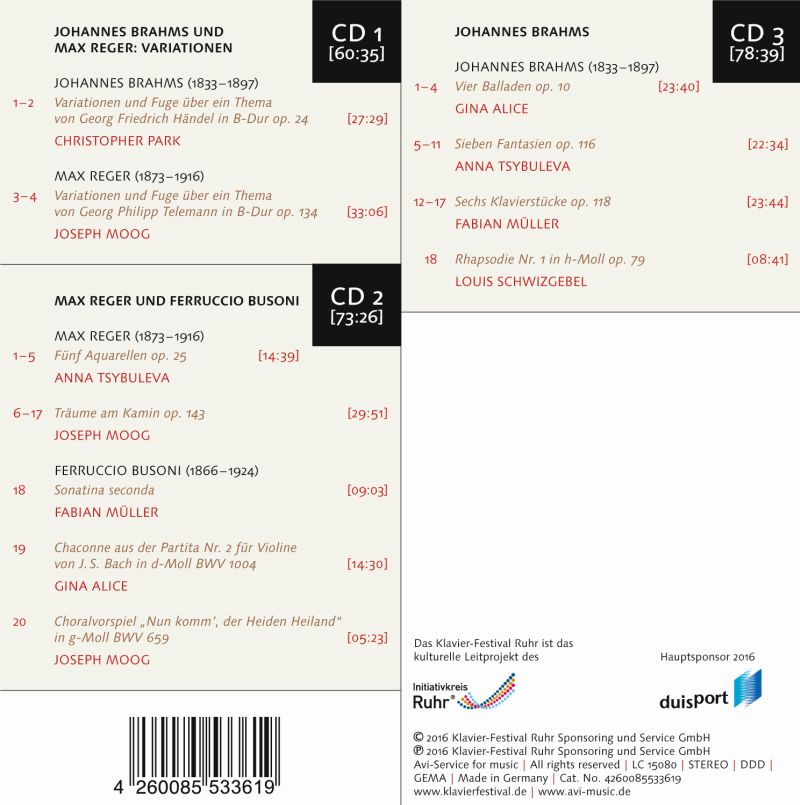 Johannes Brahms's piano oeuvre was one of the 2016 Ruhr Piano Festival's main themes. That emphasis is reflected, naturally, in the choice of works for our annual boxed set of albums, along with the anniversaries of two further composers, the works of whom are - quite unjustly - seldom performed: Max Reger (marking the 100th anniversary of his death), and Ferruccio Busoni (celebrating the 150th anniversary of his birth). Brahms's Variations and Fugue on a Theme by Handel, Op. 24, can be viewed as an act of artistic liberation, here in a version by young German-Korean pianist Christopher Park, who performed his debut recital at the Festival. Finally, Max Reger's technically and musically challenging Variations and Fugue on a Theme by Georg Philip Telemann, Op. 134 are heard in a virtuoso rendition by Joseph Moog. Max Reger's Watercolors, Op. 25, pay omage to the Romantic piano tradition, performed by Anna Tsybuleva, whom we invited as the laureate of teh 2015 Leeds Competi

Born of German-Korean parents in Bamberg in 1987, Christopher Park was admitted as a junior student at the age of 12 to the Saar University of Music. In the course of his studies he was influenced by two major musical traditions, thanks to the teaching of Lev Natochenny and Joachim Volkmann. In 2014, the jury of the Schleswig-Holstein Music Festival Foundation presented him with the Leonard Bernstein Award. Park has made solo appearances with a number of German orchestras including the Württemberg Chamber Orchestra (Heilbronn), and the radio symphony orchestras of NDR broadcasting (Hamburg) and HR (Frankfurt), col- laborating with conductors of the likes of Christoph Eschenbach, Paavo Järvi, Sebastian Weigle, Ion Marin and Paul Daniel. He has performed in Europe, China, South Africa, South Korea and the US, appearing at the international music festivals of Mecklenburg-Vorpommern, Rheingau, Schleswig-Holstein, San Sebastian and Burgos. Christopher Park gave his first Ruhr Piano Festival solo recital in 2016.

Joseph Moog enrolled as a young student at the Karlsruhe University of Music, and went on to study with Bernd Glemser in Würzburg and Arie Vardi in Hanover. He has received a great number of distinctions, including the Gramophone Magazine “New Artist of the Year” Award in 2015, the ICM (International Clas- sical Music) Award as “Instrumental Performer of the Year” in 2014 and as “Best New Artist” in 2012. Moog was already featured in the renowned Meesterpianisten series at Amsterdam Concertgebouw, and has made appearances, inter alia, with the Beethoven Orchestra in Bonn and the BBC National Orchestra of Wales. Several reviews of his CD releases have been rapturous – last not least due to Moog’s uncommon, fascinat- ing choice of repertoire. For Onyx Classics he has recorded the Grieg and Moszkowski piano concertos with Nicholas Milton and the Deutsche Radio Philharmonie. Moog gave his Ruhr Piano Festival début in 2013, and performed here for the 4th time in 2016.

Anna Tcybuleva grew up in a small town in a mountainous region in the south of Russia, close to the Geor- gian border; she received her first piano lessons at the age of six from her mother. She soon pursued her training at the music school in Volgodonsk and went on to study at the renowned Tchaikovsky Conservatory in Moscow. In 2014 she obtained her diploma with honors as the best student in her promotion. The young Russian is currently perfecting her artistry in the class of Claudio Martinez Mehner at Basel Music Academy. She has garnered awards at a number of international competitions: inter alia, she won 1st Prize at the In- ternational Piano Competition in Memory of Emil Gilels in 2012. Then, in 2015, Anna Tcybuleva became the second woman in the entire history of the renowned Leeds Piano Competition to win First Prize; the audi- ence was profoundly moved by her expressive playing. In 2016, Anna Tcybuleva gave her début performance at the Ruhr Piano Festival.

Fabian Müller’s extraordinary gift was noted when he was very young: his budding talent was confirmed by a number of 1st Prizes at the German national youth competition Jugend musiziert, followed by further distinc- tions such as the Ibach Prize, the Prix Amadéo de Piano (Aachen) and a series of special awards conferred by the German Music Foundation. At the age of 15 he started studying in the class of Pierre-Laurent Aimard and Tamara Stefanovich at the Musikhochschule in Cologne; Fabian has also actively participated in masterclasses imparted by Menahem Pressler, Pavel Gililov and Leon Fleisher. Invitations have already led him to perform in outstanding venues such as the Cologne Philharmonie, the Düsseldorf Tonhalle, the Beethovenhalle in Bonn, the Konzerthaus in Berlin and the Herkulessaal in Munich, as well as in well-known classical music fes- tivals such as Hitzacker, Aldeburgh, Mecklenburg-Vorpommern and Schwetzingen. Fabian Müller has been closely connected with the Ruhr Piano Festival thanks to his frequent public appearances associated with the Festival’s Education Projects. He gave his first Festival solo recital in 2016.

Young rising star Gina Alice is the recipient of several prestigious awards. Born in 1994 in Wiesbaden, she became a junior member of Lev Natochenny’s masterclass at the Frankfurt University of Music and Perform- ing Arts. She is currently perfecting her craft under the tutelage of Bernhard Wetz in the same institution, and has received further valuable instruction from Gary Graffman in New York. She began performing in public in Germany at the age of eight. In 2007 she made her first televised appearance in the “Klassik-Kids” show: a widely acclaimed performance of the first movement of Mendelssohn’s Piano Concerto No. 1, accompanied by the Berlin Youth Orchestra. Ever since 2012, Gina Alice has been giving guest performances on a regular basis with the Sinfonie-Orchester Berlin in the Philharmonie. In 2013 she performed the inaugural solo recital in a new concert series entitled “Young Virtuosi”, in the sold-out concert hall of the Frankfurt broadcasting station Hessischer Rundfunk (HR). Apart from a great number of appearances in Germany, Gina Alice has gained initial international experience by honoring invitations to perform in France and in Spain. She gave her Ruhr Piano Festival début in 2016.

Born in Geneva in 1987, Louis Schwizgebel studied with Brigitte Meyer in Lausanne and Pascal Devoyon in Berlin. He went on to perfect his craft at the Juilliard School in New York with Emanuel Ax and Robert McDonald, as well as at the Royal Academy of Music in London with Pascal Némirovski. At the age of seventeen he won the Geneva International Music Competition and, two years later, the Young Concert Artists International Auditions in New York. In 2012 he won Second Prize at the Leeds International Piano Competition and was selected to go on tour as a BBC New Generation Artist from 2013 to 2015. Schwizgebel has performed with many orchestras around the globe, including the London Philharmonic, the BBC Sym- phony, the City of Birmingham Symphony, the Wiener Symphoniker and the Orchestre National de Lyon. He was worked together with conductors such as Edward Gardner, Thierry Fischer, Joshua Weilerstein, Fabio Luisi, Leonard Slatkin, and James Gaffigan. Schwizgebel has performed at the Progetto Martha Argerich in Lugano, at the Menuhin Festival in Gstaad and at Verbier Festival. In 2014 he gave his BBC Proms début with an electrifying rendition of Prokofiev’s First Piano Concerto. Louis Schwizgebel gave his first Ruhr Piano Festival recital in 2016. 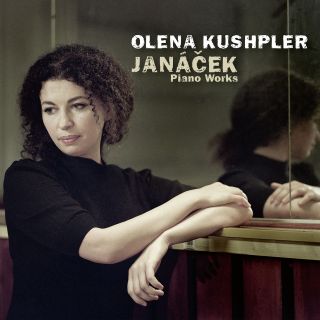