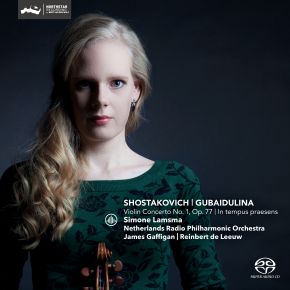 The structure of Shostakovich’s First Violin Concerto is particularly original, with a  sequence of four movements – slow, fast, slow, fast – entitled Nocturne, Scherzo, Passacaglia and Burlesque. The opening movement (Nocturne) is a beautiful song, blossoming from a single melodic fragment. The Scherzo is biting and dazzlingly virtuosic, like a carousel gone wild.  The ensuing Passacaglia is, quite simply, the pinnacle of this concerto; a masterpiece – mature, elegiac and highly lyrical. The passacaglia theme is repeated nine times with contrapuntal elaborations. This is followed by a large-scale cadenza that forms a bridge to the finale. The concerto closes with a Burlesque, in which the theme from the Passacaglia has one final, piercing reappearance.

Shortly after the premiere of Gubaidulina’s Offertorium (1981), the Swiss patron of the arts Paul Sacher asked her to compose a further violin concerto for the German soloist  Anne-Sophie Mutter, but nothing came of this due to lack of time. It was only in 2007, eight years after Sacher’s death, that Gubaidulina completed In tempus praesens, which was given its première by Mutter at the Lucerne Festival. It is a work of extreme contrasts in which very deep, infernal passages are juxtaposed with extremely high, celestial episodes. Much more so than Offertorium, In tempus praesens is a spectacular work for the violinist, who plays virtually from start to finish and barely has a chance to pause for breath. The virtuosity demanded by the work is never an end in itself.

Pizzicato on Lamsa’s first release on Challenge Classics (CC 72677): "The surround recording from Challenge Classics stands out due to especially brilliant and powerful interpretations and a finely coordinated dialogue between the instruments. This is perfect harmony."

Two stunning Concertos which shine in an outstanding way within the hands of Dutch violinist Simone Lamsma....[Shostakovich] Lamsma is gentle, subtle, with a very fine tone... [Gubaidulina] The work is among the very best of XXIst Century and Lamsma is really extraordinary.

"
01-12-2017 Amadeus Magazine
"The performances by the Netherlands Philharmonic Orchestra conducted by James Gaffigan and Reinbert de Leeuw are enhanced by Simone Lamsma's sharp and pregnant tone"
27-11-2017 Fanfare Magazine
"Want List 2017
Fanfare Magazine – Robert Maxham
“A reading by Simone Lamsma of Shostakovich’s First Concerto that should set a standard for the next several generations in the way David Oistrakh’s did for the last several."

24-11-2017 Fanfare Magazine
"For her pairing of striking performances of striking concertos by two generations of Russian composers, Lamsma deserves an especially high commendation."

"The opening of the Passacaglia possesses overwhelming, if not crushing, weight in this reading, and Lamsma enters with a subtly nuanced statement over the bass that almost makes Oistrakh's sound bland by comparison. As she reaches climax after climax, the orchestra growls beneath her with a menace far greater than in Oistrakh's early Russian or American recordings."

24-11-2017 Fanfare Magazine
"For decades, reviewers have been suggesting that this or that violinist (beginning with Perlman) had somehow surpassed Oistrakh's accomplishment; many listeners will now, I believe, judge that Lamsma finally has. Overwhelming."
30-10-2017 Crescendo
"Sound 9 (Live recording for Gubaidulina) - Booklet 8 - Directory 10 -Interpretation 10
Simone Lamsma is equal to the height of the work, music to discover"

30-10-2017 Primephonic
"Rating: Performance: five stars Sound: five stars
The Dutch violinist Simone Lamsma demonstrates in both works an inspiring empathy with the music and its driving forces. There is a fabulous finesse and power to her technique, which is always placed at the service of these overwhelming emotions: without overstating the latter or indulging in histrionics or forcedness, she is faithful to the composers and lets serious, spiritual expression shine out."

08-09-2017 Gramophone
"This is a unique coupling from a young Dutch violinist"
01-09-2017 Wholenote
"It’s an impressive performance of the Shostakovich, a deeply personal work written a few years after the end of the Second World War..."
29-08-2017 Svensopernparadies
"A CD that should not only inspire lovers of violin music."
03-08-2017 The Strad
"This is already the third recording of a fervent and gripping work, and Simone Lamsma is a more than worthy successor to Mutter"
01-07-2017 Fono Forum
"Simone Lamsma is guilty of nothing, plays Gubaidulina's piece with a sonority, which at the same time light permeable remains for the gentle gleam in this piece of the mystic composer Gubaidulina."
31-05-2017 Pizzicato
"

"
29-05-2017 Crescendo
""The Magic Violin[…]
Yes, it would be difficult to deny, “In Tempus Praesens” is one of the great monuments of the modern violin, and one can only welcome the interpretation given here by the Dutch violinist Simone Lamsma, rightly considered today as one of the most gifted of her generation. She literally embodies the sublime music of Sofia Goubaidulina…[..]”
Sound 10 - Booklet 7 - Repertoire 9 - Interpretation 10"
26-05-2017 Klassieke zaken
"I'm not chauvinist and don't hesitate to say that Lamsma absolutely the best performance so far with this dramatic and ecstatic piece full of Christian symbolism. You need to hear this."
26-05-2017 Klassieke zaken
"Impressive, intense and personal"
18-05-2017 The Violin Channel
"The Violin Channel recently caught up with Dutch violin virtuoso Simone Lamsma"
14-05-2017 Bachtrack
"Dutch violinist Simone Lamsma stole the show with a revelatory account of Shostakovich’s Violin concerto no. 1"
28-04-2017 Gramophone
"A stunningly mature and powerful performance that goes deeply and subtly into two very complex works."
14-04-2017 Luister
"I hope the music on this disc will speak to people and will move them in some way. All I can do is bring out what is inside of me, and with that choose the music that I feel is worthy of being heard. I want to share that passion."
14-04-2017 De Volkskrant
"The coloration to a pale and small tone in the heart of the first movement is oppressive. The Scherzo is demonic, the following Passacaglia is especially powerful, and the cadenza that forms the bridge to the Finale, is almost a composition in itself."
25-03-2017 De Volkskrant
"The newspapers praise her emotional intensity and clarity."
23-03-2017 Dagblad van het Noorden
"Simone Lamsma (1985) is one of those amazing Dutch violin talents with an established international reputation, no mountain too high for her! "
18-03-2017 Het Parool
"

"Simone Lamsma (Leeuwarden, 1985) is one of those amazing Dutch violin talents with an established international reputation, for whom no sea is too high.

....I wholeheartedly agree with Jaap van Zweden, whom I’ve heard mention Simone Lamsma as the greatest violinist of our time ....

....In her reading Ms Lamsma not only has the required skills & bravura, but is also able to understand and share the emotional aspects with Maestro James Gaffigan..." (about Shotakovich)

".... This is a deeply moving account which has to be heard to be believed... " (about Shotakovich)

"...breathtakingly conceived and performed ..." (about Gubaidulina)


"...Lamsma gives it a brilliantly extrovert reading, doing full justice to the sense of 'In tempus Praesens' [.....] Phenomenal. Expect applause at the end ... " (about Gubaidulina)

.. a violinist with a rich, throaty tone to draw the singing heart out of Shostakovich's first violin concerto...