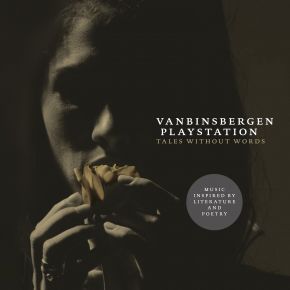 'Over the last few years, I have composed music for many literary concerts, where writers tell their story live and I create a musical scenario based on the story. I then arranged some of these compositions for the band and took them with me to the studio. All the notes were new to the musicians. Although we had only two days to record everything, I felt certain this would not be an issue, since the band is such a close-knit group. Plus, something special often happens when musicians are still exploring material. And you can hear it, too. The result is a mysterious album featuring layered, richly resonant pieces in which the musicians take turns telling their own musical story.' (Corrie van Binsbergen) All compositions on this release were originally composed for stories and poems by famous Dutch writers and guitarist Corrie van Binsbergen. She later arranged her compositions for her 'all-star' band VanBinsbergen Playstation.

In March 2014 these musicians met for the first time during the BrokkenBal, the yearly concert I organize with writers at the Amsterdam Bimhuis. From the first rehearsal on, the horns blended, the rhythm section was steaming and we all felt immediately this was a perfect match; a year later we had our first concert as VANBINSBERGEN PLAYSTATION! This dynamic live CD is recorded during our first two concerts.

Albert van Veenendaal (featured)More information
10-09-2017 JazzNu
"Vanbinsbergen Playstation: unprecedented concert experience"
05-05-2017 Jazzism
"The heterogeneous approach makes the music as a whole varied and exciting"
17-04-2017 JazzFlits
"A wide range of music. Ranging from beautiful fine tunes that's worked out quite nicely, an uptempo jazz piece for a immersive solo guitar, to modern classical pieces."
13-04-2017 Vrije Geluiden
"(...) Small, carefully played stories, in which it is the finest details that hold you as a listener like an exciting book can do that to a reader. Nice! (...)"
09-03-2017 Draai om je oren
""" (...) 'Tales Without Words' can definetly be called succesfull (...) ""
03-03-2017 Jazzenzo
"" (...) A conceptalbum that attracts from the beginning to the end, maybe the best Van Binsbergen album so far (...) ""
24-02-2017 Moors Magazine
"Jazz with a touch of humor, lyrical lines, music where you can completely sink into."