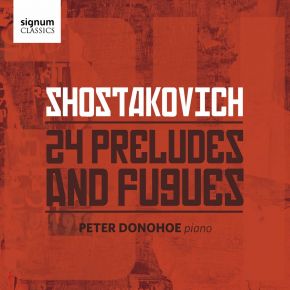 Celebrated international pianist Peter Donohoe begins a new series of Shostakovich releases on Signum Classics with this new recording of Shostakovich's 24 Preludes and Fugues, Op. 87. All 24 of the preludes and fugues were composed within several months, after Shostakovich was inspired by the performance of Tatiana Nicolayeva, whom he heard as a jurist for the Leipzig Bach Competition in 1951. Although doubtlessly inspired by J.S. Bach's own 48 Preludes and Fugues in his use of form and counterpoint, Shostakovich's compositions are all deeply original and rooted in his own enigmatic and ambiguous style, moving from charming simplicity to dazzling virtuosity.

Dmitri Shostakovich (composer)More information
02-04-2017 Stretto
"This is top class, this is a global level, this is not to be missed!"