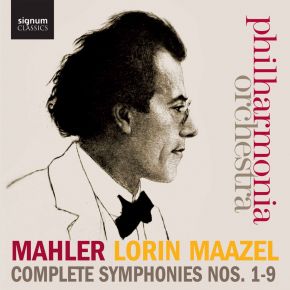 Led by Lorin Maazel, the Philharmonia Orchestra are captured at their very best in these live performances of Mahler's Nine Symphonies. Recorded in concert at London's Royal Festival Hall, the symphonies include performances by soloists and ensembles including Sarah Connolly, Michelle Deyoung, Philharmonia Voices and the BBC Symphony Chorus. Praise for these performances has been near universal...'You get that audience perspective as if you were sitting in the hall, and its got all the energy and focus of a live or concert recording.' (BBC Radio 3) '...Maazel could sustain this score in a way that seemed to transcend reality...a tremendously moving experience.' (Classical Source) 'an extraordinary reading of the Ninth...a performance touched by greatness.' (Musicweb International)

Hello, I am told that each disc comes in a plain paper sleeve.Is this so? A poor presentation if true.