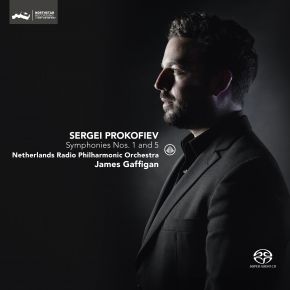 The image Sergei Prokofiev seems to project, particularly when it coems to the music he wrote while living in the West from 1914 to 1935, is one of a joker and an agitator, yet a classical composer at the core. This double identity can be heard even in his earlier works, mostly for piano, written before 1914, and was sealed with his ''Classical'' Symphony in 1917. The subtitle is the composer's own. Indeed, Prokofiev stated, ''I wanted to write a symphony that Haydn or Mozart would have written had they lived in the twentieth century.'' Symphony No. 5: Prokofiev wrote the work in the Soviet Union in 1944, when the Nazis were increasingly losing ground but had certainly not yet been defeated. Although the symphony lacks a programme per se, it is undeniably a depiction of war and victory. Heroism is always tinged with the tragedy inherent in war, and the grand gesture is both sincere and theatrical.

Netherlands Radio Philharmonic Orchestra (orchestra)More information
29-06-2018 Classical.net
"The sound reproduction by Challenge Classics is excellent and the Netherlands Radio Philharmonic Orchestra plays at or nearly at world class level for the conductor."
13-10-2017 Music Web International
"this is a top-notch performance and a state of the art recording which will not disappoint."
08-09-2017 Fanfare Magazine
"Gaffigan was astute to concentrate on the wonderful variety of Prokofiev’s orchestral imagination. That and the joyous spirit of these two readings warrant a warm recommendation."
04-08-2017 Klassieke Zaken
"The Radio Philharmonic Orchestra is in excellent shape under the guidance of regular guest conductor James Gaffigan"
01-07-2017 Luister Magazine
"Even if you already own the First and Fifth Symphony, this album (third in the serie) is worth buying. This is definetly on the same level as its competitors."
28-06-2017 Kerk en leven
"Beautiful, interesting works that Challenge Classics closely links to this CD."
12-05-2017 Trouw
"An exciting adventure with Prokofiev"
28-04-2017 HRAudio
"The sound. Over the past decade I have been reviewing discs with varying sound quality. It is rare to get such a consistently high sound quality as with those released by Challenge Classics."
01-02-2017 Gramophone
"If Fauré's piano music has eluded you until now, these performances may provide the key."