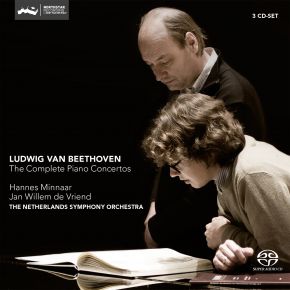 Here is the box containing Beethoven’s five Piano Concertos performed by Hannes Minnaar and The Netherlands Symphony Orchestra under the baton of Jan Willem de Vriend.
So far two single volumes had been issued: while the one including Concertos nos. 4 & 5 was acclaimed by Gramophone as: "beginning a Beethoven cycle with the Fourth and Fifth Concertos is a bold move but one that pays off in all sorts of ways", the same magazine welcomed the disc with Concertos nos. 1 & 2 for “its pleasing mix of finesse and drive”.

Now the box also offers the so far unissued Concerto no. 3.

Despite the very large number of recordings already made of this musical corpus, Minnaar and de Vriend have proved that they have something new and totally their own to say about this collection of masterpieces. And it is indeed the peculiar blend of sheer energy and esprit de finesse that can be identified as the distinctive brand or these recordings.

If you haven't found out yet: Add your email address top right where it says "Let me know when available", 29.92 euro.

Sorry, I read the page a couple of times but it remained a mystery to me how I could order this box. Do you intend to keep that a mystery? Or did I miss something obvious?

Hannes Minnaar (soloist)More information
27-02-2018 Crescendo
"Hannes Minnaar was so lucky to study with Alfred Brendel and he owes him a lot. Surely he owes him the beethovenian feeling of balance and, even more, the beethovenian outstanding clarity."
09-01-2018 Music Web International
"All three are highly recommendable modern cycles in top-notch sound, and Minnaar’s very satisfying cycle might yet prove to be the more central recommendation among them."
06-10-2017 Luister
"A grand performance of a conductor with vision, a pianist radiating peace and control and a label with guts. And last but not least, an orchestra to treasure."
28-09-2017 WDR3
"The young Dutchman Hannes Minnaar faces the challenge with an overall recording; with the conductor and Beethoven expert de Vriend."
14-09-2017 Dagblad van het Noorden
"Pianorecital by master pianist"
09-09-2017 Pizzicato
"

Choosing his own musically very rich way, Hannes Minnaar is very well supported by Jan Willem de Vriend, and both sign an unconventionally personal account of Beethoven’s Piano Concertos, the first reference recording of this cycle in the 21st Century.

"
28-08-2017 WDR3
"These are the ultimate Beethoven concerts for the second decade of the 21st century!"
24-08-2017 The Guardian
"Buoyant, joyful and brimming with energy"
04-08-2017 Klassieke Zaken
"The pianist is a true performer, a musician who is not in the forefront, but uses the golden interpretations of the music."
19-07-2017 De Gelderlander
"Pianist Hannes Minnaar is immediately in the ropes"
19-07-2017 De Gelderlander
"Glad to say we still have these impressive Sacd's"
05-07-2017 De Groene Amsterdammer
"Between the two creates a tension of plus and minus ends that the most exquisite interplay gaining force against time. Minnar makes the light heavy, De Vriend the heavy light."
23-06-2017 Kerk en leven
"The Dutch music label Challenge Classics has a gem with the young pianist Hannes Minnaar."
12-06-2017 Radio 4
"

"
04-06-2017 HRAudio
"Minnaar is more a combination of a sober Northerly perfectionist with exiting French flair, (compare his wonderful solo disc Fauré: Piano Music - Minnaar) both characteristics intertwiningly co-existing in his Beethoven. Taken all these elements together, I’d say that this set is hardly comparable with anyone else’s."
04-06-2017 Classic FM
"The album of the week, a 3 cd box, containing Beethoven's five Piano Concertos performed by Hannes Minnaar and The Netherlands Symphony Orchestra under the baton of Jan Willem de Vriend."
01-06-2017 Opus Klassiek
"The members of the Netherlands Symphony Orchestra are playing on the edge of their Chair. And Hannes Minnaar follows that same steep path perfectly! Nothing is flattened or updated. Then there was Bert van der Wolf who has immortalized this extremely colorful and engaging piece in a beautiful recording."