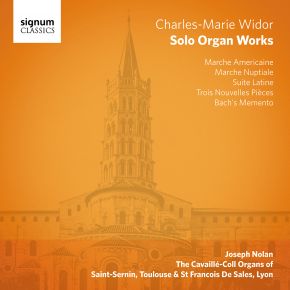 Joseph Nolan follows his five internationally acclaimed volumes of the Complete Organ Symphonies of Charles-Marie Widor with a collection of the composer’s other works for solo organ. The disc includes his Trois Nouvelles Pieces, March amèricaine and Marche Nuptiale and Memento – a collection of transcriptions of works by J.S. Bach.

In April 2016, Joseph Nolan was made a Chevalier (Knight) in the Order of French Arts and Letters for his services to French Music.