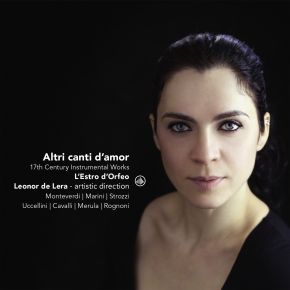 This debut CD of L’Estro d’Orfeo ensemble takes its title Altri Canti d’Amor from a madrigal found in Claudio Monteverdi’s Eighth Book of Madrigals. The program focuses on the music of the Italian Seicento and more precisely on the schools of northern Italy; mainly the Venetian school. It combines both instrumental and vocal pieces- the latter in instrumental versions- connected to the subject of ‘love’. Using instruments instead of the voice may initially seem perverse for such a title, but to me, it suggests the idea of “other ways of singing about love”;

We thus reaffirm the great value and importance that instruments started gaining in the first half of the 17th century, where they ceased serving merely as accompaniments to the voice and gradually became the main protagonist of the musical scene, attaining a level of virtuosity that had never been explored before.

Leonor de Lera (soloist)More information
19-11-2018 Klassik.com
"A highly successful and very musical debut album of the young ensemble L'Estro Orfeo, which specializes in chamber music of the Baroque."
30-04-2018 Early Music America
"Altri canti d’amor was recorded in the Church of St. John the Baptist de Secadura in Cantabria, Spain. Bright and immediate, the sound carries just a hint of the lively acoustic of the space without losing clarity or definition."
31-01-2018 Music Web International
"With so much exquisite playing and rare and magical music my only other gripe, and it is a significant one I feel, is that the disc weighs in at well less than the usually obligatory hour. The programme is however beautifully planned and recorded in detail and with atmosphere in a beautiful medieval church in northern Spain."
30-01-2018 Classic a la carte
"This is the ensemble’s debut recording. More, please!"
02-01-2018 AMERICAN RECORD GUIDE
"This is the ensemble’s debut recording. More, please!"
01-12-2017 Luister
"The program unites instrumental and vocal compositions around the theme 'love'. But the human voice has been replaced by an instrument."
28-11-2017 The Whole Note
"This is a CD with two pleasant surprises. One is a track from undervalued Renaissance composer, Barbara Strozzi. The other is a contemporary set of divisions on a Renaissance theme composed by the present-day artistic director of the CD, Leonor de Lera."
27-11-2017 Disco Exceptional de Scherzo
"I can't stop praising the young generation of ancient music Spanish musicians [...] They got talent, imagination and, most of all, they got the will to make great things. A confirmation comes from Madrid violinist Leonor de Lera.
De Lera's collaborators are her usual partners, a mix of Spaniards (the excellent tiorbist Josep Maria Martì and the no less excellent harpsichordist Javier Nunez) and latin-americans (the outstanding cornet player from Guatemala Josué Meléndez, the expert gambist from Costa Rica Rodney Prada and the Argentinian violinist Lucìa Giraudo).
The outcome of this work overtakes any expectation, since L'Estro d'Orfeo places the crossbar very high. Wonderful de Lera in her double role of violin soloist and conductor, although to count on such travelling companions makes things easier."

29-09-2017 Klassieke Zaken
"The performances are recorded in a small baroque church in Cantabria, where the amorous sounds of L'Estro d'Orfeo are being carried on wings by the golden reverberation."
23-09-2017 Pizzicato
"

Taking profit from an incredibly good sound recording, the performances of L’Estro d’Orfeo draw the listener right in the center of the music-making. That’s a gripping experience, all the more valuable since the program comprises some unknown pearls. Unfortunately, with only 50 minutes, the CD is rather short.