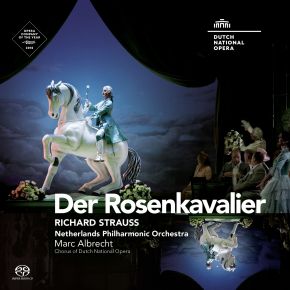 During the mid 18th century, there was a popular genre of painting called the capriccio. It featured imaginary topographical scenes in which various elements, largely architectural, were brought together as never possible in real life. They offered dazzling views and set the imagination in a spin. Hugo von Hofmannsthal and Richard Strauss’s Der Rosenkavalier is the operatic equivalent, for in its re-creation of ‘the old Vienna under the Empress Maria Theresia’ – the very period in which the genre of the capriccio flourished – it juxtaposes seemingly distinct elements, such as 18th-century social conventions, 19th-century waltzes and 20th-century thinking.
Following Hofmannsthal’s lead, Strauss constantly switches between the lyrically symphonic and the downright bawdy in the opera.

Five Stars by bachtrack.com: Marc Albrecht, once again presented his platinum Strauss credentials…The Netherlands Philharmonic, playing with dreamlike ease, tugged at the heart with airborne woodwinds and shapely violin lines, stopping a hair’s breadth away from full extravagance. This introspective restraint created a tenseness throughout, rendering the emotional climaxes all the more powerful.

14-10-2017 Het Parool
"Under the direction of Marc Albrecht, the Dutch Philharmonic Orchestra played the trusted high level."
29-09-2017 Klassieke Zaken
"At every level the music is joyful and challenging"