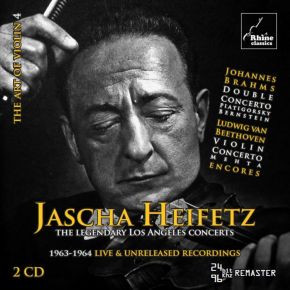 MusicWeb: «This is a valuable addition to the discography. - The Los Angeles concerts of 1963-1964 were given at the Hollywood Bowl, in which Heifetz and Piatigorsky played the Brahms Double with Leonard Bernstein, and at the Dorothy Chandler Pavilion where the violinist essayed the Beethoven with Zubin Mehta. Neither concert has apparently been issued before. There are two bonus tracks, previously released, that come from the Bell Telephone Hour with Donald Voorhees conducting in Radio City, New York in February 1950. The Dvořák is tightly coiled, cloaked and hooded, full of inimitable tonal splendour and not remotely relaxed, whilst the Sarasate Habanera is suave and bewitching. Cembal d’amour once issued this (CD-113) but their transfer is cloudy and palpably inferior to this one.»