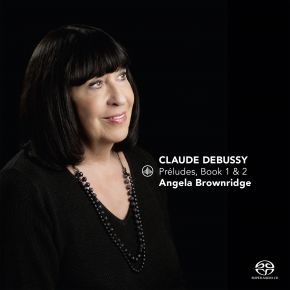 Whereas Bach and Chopin used their Preludes as something of a technical exercise, composing one for each musical key, Debussy's were free-form and full of his signature expressive indulgences. Each one has a different descriptive title that gives clues about what was going through the composer's mind when he was writing them, from Shakespearean dances to underwater cathedrals.

What Debussy did in the Préludes and earlier works with a similar inspiration was composing with sounds rather than notes. It is that, rather than their picturesque qualities, that changed history. Debussy did nothing less than liberate music from the domination by functional harmony which had prevailed for three centuries. Tonality becomes colour.

Claude Debussy (composer)More information
23-01-2018 Stretto
"This is a wonderful piano game that combines technical virtuosity with astonishing subtlety and dynamic control. Highly recommended."
04-01-2018 MUSICAL OPINION QUARTERLY
"The recording quality is of demonstration standard, making a disc that deserves a place in any record collection. Most comprehensively recommended."
10-12-2017 CD choice UK
"This Debussy disc represents the apogee of her achievement."
27-11-2017 Opus Klassiek
"The pianist does not settle for conventional beauty, but would like to give the rhythmic innovations all space. Moreover, this pianist is not a lover of vagueness and slowness that must suggest depth. Her playing therefore has clear qualities."
01-04-2017 MUSICAL OPINION QUARTERLY
"I simply had to make a CD of my choice of Debussy, So I suggested the complete Préludes and L'Isle Joyeuse"