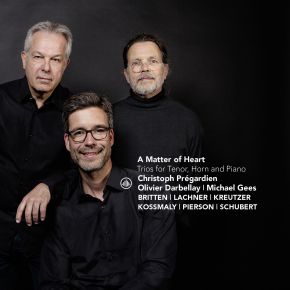 By 1800, several songs with horn, harp or piano accompaniment had been written, but it was not until the heyday of the romantic art song – its main exponent being Franz Schubert – that the combination of voice, horn and piano came into flower. From the nineteenth century alone, around 200 songs with obbligato horn parts survive.

When Franz Schubert composed Auf dem Strom, D.943 (“On the river”), in 1828, he had created a masterpiece in the genre of the so-called concert song. Schubert’s circle of friends in Vienna comprised many young composers, including Franz Lachner. “Die Seejungfern”(“The mermaids”) was written on 1 January 1833 in Vienna. “Herbst” (“Autumn”), was written earlier in either 1830 or 1831. Another composer who lived in Vienna at the same time as Franz Schubert was Conradin Kreutzer (1780-1849). His two songs with horn accompaniment, of which “Das Mühlrad”(“The mill wheel”) became very famous, whilst the later “Ständchen” (“Serenade”) is hardly performed, both pay homage to the fashion of the time, but also reveal a well-versed composer at every turn.

Carl Kossmaly (1812-1893), born in Wrocław, was well-regarded during the nineteenth century as a composer, conductor, music writer and teacher. For decades he contributed to the “Neue Zeitschrift für Musik, founded by Robert Schumann, making his mark as an antipode of the “New German School” of composers including Wagner and Liszt. Only a smattering of his compositions has been published, such as “Fischermädchen”(“Fisher girl”), and “Sehnsucht”(“Longing”).

Henry Hugo Pierson (1815-1873) had a chequered life; his works were also published under the name of Edgar Mannsfeldt. Alongside operas, oratorios and orchestral works his oeuvre also comprises several songs, including “Jägers Abschied.

In 1956 Benjamin Britten created, in collaboration with the poet Edith Sitwell, a musico-literary programme for the Aldeburgh Festival. This programme, entitled “The Heart of the Matter” centred around Canticle III, a work for Tenor, Horn and Piano. In 1983, Peter Pears revised and revived the work, and it is in this version that “The Heart of the Matter” has been performed since.

The booklet with libretto can be downloaded here.

I've got a review copy from American Record Guide. It a pity not to have the texts. Can you send me a copy ASAP?

Dear Malcolm and Florian, thanks for your feedback. Due to a mistake this wasn't printed in the booklet. We will prepare a digital booklet and publish it on our website soon.

I fully agree with Malcolm Wren. A full price CD without the texts of the songs is simply one thing - defective. It seems that the people at Challenge thought that a paper case around the jewel case is more important than the texts. Sad - so far I thought Challenge was a good company.

I have bought this excellent record. However, it is a terrible shame that it does not include the texts of the songs. This diminishes the value of the CD considerably, particularly since so many of the works are relatively unknown.

Michael Gees (featured)More information
21-02-2019 Operalounge
"The horn is then also the connecting instrument to the other titles of the recording."
07-09-2018 DAS ORCHESTER
"The fact that this CD is a matter of the heart of the three musicians cannot be overheard ... and the expectations ... are certainly fully fulfilled."
03-08-2018 OUVERTURE
"Tenor, horn and piano - that was a combination that was made for the Romantics!...a small but attractive selection."
23-04-2018 Fono Forum
"

...the works are more than just curiosities with horn, the sound of this "heavy" wind instrument provides an exciting grounding, all the more because here everything sounds all of a piece.

"
19-01-2018 Luister
"Darbellay emphatically comes forward. The horn player sings a full-fledged song. I do not think that is a crazy choice. It gives an enormous power of expression. This without the horn dominating. Both Gees on the piano and tenor Prégardien offer more than enough counterweight."
02-01-2018 Classic Voice
"GREAT INTERPRETERS:
Ivan Fischer, Christoph Prégardien, Kuijken Piano Quartet, Marc Albrecht"

16-11-2017 Opernglas
"Prégardien sings these songs with an unfailing, subtle sense of the meaning of each word. His bright, exceptionally beautiful  and expressive tenor comes into its own in this anthology."