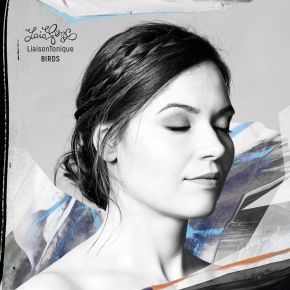 Judging by the current advance praise, "Birds" is actually a huge success even before its official release. Thanks to a crowdfunding appeal, Laia Genc actually succeeded in raising a hefty sum for her new CD with her trio Liaison Tonique and band members bassist Markus Braun and drummer Jens Düppe. Ninety-two supporters, including 35 "hardcore fans", donated in anticipation of a musical project, which has once again demonstrated the unusual ways that the pianist/vocalist and her co-musicians have been taking for more than a decade.

Liaison Tonique signifies something like "strengthening connection” for Laia Genc. A stringent, complete work of art has been created in this way over the years, which documents the best moments of her life of music with dignity. Born as half Turkish and raised as a whole Prussian in Berlin, she finally converted to a Rhenish cheerful nature in Cologne and studied jazz piano under Hubert Nuss and John Taylor at the Cologne Music Academy. In 2004, Laia spent a year in Paris where she studied at the Conservatoire National Superieur de Musique et de Danse de Paris. Her own journey through life, characterized by the search for identity and authentic expression, is expressed by the continually progressing music that she has composed since then. It consists of elements of jazz, free improvisation and oriental influences combined with sound surfaces and song-like structures. Always on the lookout for her own distinct sound, Laia Genc leaves like the known paths of theory, especially with a traditional band format such as the piano trio.

Jazz consists of lived stories for Laia Genc, which are repeatedly new but told differently. On "Birds", she approaches the 88 white and black ivory keys with a refreshingly unorthodox approach to themes such as freedom, transformation, a July moon at sunset, the silence under the sea, and many others in her focus. "I am following an authentic form of expression with that and would like to take my audience on an inner journey. My life is so rich thanks to music that I absolutely want to share it!" Of course, much is still based on the principles of interplay, i.e., the internal symmetry between the instrumentalists. But it is precisely the organic unity between Genc, Braun and Düppe that gives each an individual a form of freedom that distinguishes them from many other bands of the genre.

The pianist, who composed nine tracks, emphasized that their target audience consists not of die-hard jazz nerds. Jens Düppe composed "Allemande" and "Two Birds" (Jens Düppe) and Rupert Stamm "Die Stille unter dem Meer". Anyone can start to swing listening to "Birds" at the start and begin to think of other things. "The album is a vehicle that stores the current period of my work forever. However, the most beautiful and intense moments often occur in the concerts. Irretrievable and consequently so special. A CD tries to capture this magic to make it possible to experience the music at home or in a car."

When the band members of Liaison Tonique intertwine with each other and jointly defy gravity, they provide honest fun, cool lightness and the joy of the moment. These beautifully small, finely wrought facets lead you to discover new surprises in each song again and again. Then the small laboratory arrangement of the trio goes beyond mere playing with meter and sound and creates great moments of artistic force. The birds begin to fly.