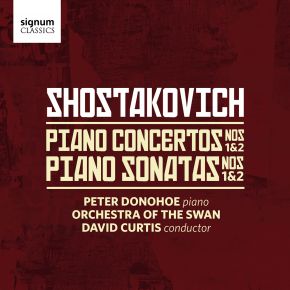 Celebrated international pianist Peter Donohoe continues his series of Shostakovich releases on Signum Classics, following his recent release of the 24 Preludes and Fugues, Op. 87. For this new recording he is accompanied for the concertos by the Orchestra of the Swan under their artistic director David Curtis.

In his compositions Shostakovich, after mastering the orthodox nationalist style of Borodin and Rimsky-Korsakov in his earliest orchestral works, had quickly shown a rebellious streak. To the dismay of both his composition teacher Maximilian Steinberg (Rimsky-Korsakov’s son-in-law) and his piano teacher Leonid Nikolayev, Shostakovich increasingly turned for inspiration to such leading modernists as Stravinsky and Prokofiev. Nikolayev was distinctly unimpressed with Shostakovich’s Op 12, calling it 'a sonata for metronome to the accompaniment of piano'. It is, of course, far more than that, but it is unquestionably a gnarly and knotty work for both performer and listener. It starts with a by turns nervy and thunderous allegro. Then follows a lento in which an alto melody is picked out, sandwiched amid what Prokofiev described as 'supple harmonies'. This leads without a break into a concluding allegro, boiling upwards from the bass like a malevolent spirit.

In 1932, Shostakovich decided to return to the concert platform as a pianist. For that purpose, he composed a set of 24 Preludes, Op 34, in December, shortly followed by his concerto for piano, trumpet and strings in spring 1933. Again, as with the first sonata, we can hear the influence of Prokofiev. Though nominally in four movements, the third movement is so brief that it effectively serves as a prelude to the finale; so to the casual listener the work falls into three main movements: a slow movement framed by lively outer movements in which we are presented with a circus-parade of Classical clichés in the style of Mozart, Haydn and Beethoven.

Shostakovich’s second piano sonata is one of the most substantial works he composed for that instrument. It opens with a limpid allegretto, whose two themes are developed, building an increasingly involved and chromatically more anguished texture. The slow central movement offers hints of a more lyrical style in the midst of bare and often angular accompaniment with bitter harmonic implications. The finale, in the form of a set of nine variations, was in direct tribute to Shostakovich’s teacher who had recommended variation writing as a perfect exercise for budding composers to discover their own style.

Shostakovich composed his second piano concerto in 1957, just as he was recovering from the huge emotional blow of the sudden death of his first wife, Nina. The work appears a light divertimento rather than offering any of the shadows to be found in Shostakovich’s earlier concerto, let alone the darkness of his sonatas.Yet the pianist, Peter Donohoe, hears a darker subtext in the typically ‘triumphant’ treatment given to the first movement’s second subject, the modulation from C major to the minor for the end of the second movement, and the relentlessness of the superficially light-hearted third movement.