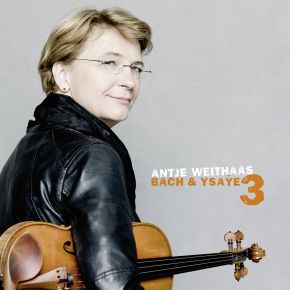 For the love of Bach, to discover Ysaÿe VOL. III

Vol. III of Antje Weithaas‘ Trilogy with works of the two cycles.

It was Antje Weithaas’ own idea to jointly record Johann Sebastian Bach’s six sonatas and partitas for solo violin in conjunction with Eugène Ysaÿe’s six solo violin sonatas. “The works by Bach are rather well-known”, she remarks. “But what about the Ysaÿe sonatas? Ysaÿe is invariably shoved into the virtuoso corner, but as a composer he is to be taken quite seriously!” - Now the No. 3:

The violin was the instrument his father had taught him when he was still very young: father and son were much in demand as a duo in Eisenach. The son, Johann Sebastian Bach, played the instrument during his entire life and well into old age – “with a pure, incisive tone”, as his sons testified. After having obtained a post at the court of Weimar in 1703, he started writing the first of a total of six sonatas and partitas for solo violin without thorough bass accompaniment. In 1720, in his new post as Kapellmeister in Köthen, he made a new copy of all the sonatas and partitas in his most beautiful handwriting for his own use, and in order to present his skill to others. Bach plotted the best points for page-turning , while thoughtfully placing ornaments and bowings in the score. When his employer Prince Leopold took the court orchestra to play for him while he stayed at the health resort in Carlsbad, Bach finished the score there. “What a fortune for us violinists!” exclaims Antje Weithaas: on this recording she has followed the composer’s precise instructions. “I have applied all his original trills and bowings, purposefully avoiding mere ease and comfort; that’s the only way to make the music sound truly lively.”

These solo works by Bach inspired Belgian violin celebrity Eugène Ysaÿe to write his Six Sonatas for Solo Violin, op. 27, dedicating each one of them to a great violinist of his time. Ysaÿe is regarded as the main representative of the Franco-Flemish violin school, closely associated with the fin-de-siècle period when architecture was awash with flowery ornaments. In painting and poetry, meanwhile, symbolism and sensuality abounded. Artists either adored or detested Wagner, who became the main subject of musical discussions throughout Europe. Ysaÿe burst in on the concert scene as a child prodigy, studied in Brussels and Paris, travelled the world and eventually took up the directorship of Brussels Conservatory.

He started to conduct more frequently – particularly the “Société Symphonique des Concerts Ysaÿe”, an orchestra he had founded himself. He also found more time for composing. Ysaÿe is said to have conceived the plan of the Six Violin Sonatas within the course of one day in 1924, when he was 66 years
old. In terms of violin technique and musical expression, each sonata is the character portrait of a renowned violinist of his day.

Eugène Ysäye (composer)More information
02-01-2018 Gramophone
"I suspect Weithaas won't remain the only violinist to put these two cycles together. However, I also suspect that, regardless of who next takes the plunge, hers will yet stand tall alongside it."