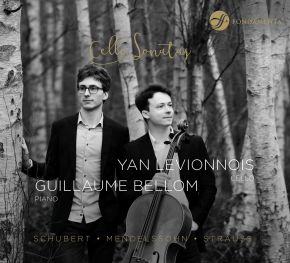 Yan Levionnois made a name for himself with his very first album, Cello Sollo, released by Fondamenta in 2013, garnering the prestigious “ffff” label awarded by Télérama magazine. This was followed by Pierrots Lunaires, with violinist Mélanie Clapiès, also brought out by Fondamenta.

Guillaume Bellom has taken an unconventional path, training as both a pianist and a violinist, and was also awarded Télérama magazine’s esteemed “ffff” label for an album dedicated to  Schubert in 2013. In 2017 he was nominated in the Instrumental Revelation category at the French Victoires de la Musique.

Schubert is honoured with a performance of his Sonata for Arpeggione and Piano. Don’t try looking out for an arpeggione – only about a dozen of these instruments have survived to the present day. It was a hybrid of a guitar and cello, played with a bow, but which never gained popularity. The eponymous sonata, on the other hand, is still considered as one of Schuber’s major works.

Mendelssohn composed the Sonata Number 2 for Cello and Piano in 1843, almost 20 years after Schubert’s composition. Mendelssohn made an early start: at the age of 12, he composed an opera, and his famous octet was written when he was 16. This sonata is classical in both its form and musical inspiration, a real gem. Mendelssohn was not only a great composer, but he also revived the music of J.S. Bach.