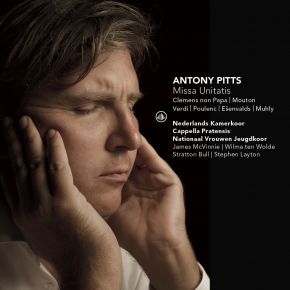 This program around the Missa Unitatis represents a meeting of many different musical travellers. Shortly after making its home in the southern Dutch city of ’s-Hertogenbosch in 2006, Cappella Pratensis renewed its acquaintance with an organisation that has been travelling through some 700 years of history, the Confraternity of the Illustrious Lady. To celebrate the Year of Religious Heritage in 2008, the Confraternity commissioned a work by the British composer Antony Pitts. The commemoration, in 2016, of 500 years since the death of Hieronymus Bosch was the ideal opportunity to première the version of the Missa Unitatis for double chorus. The Nederlands Kamerkoor graciously accepted the invitation to join forces with Cappella Pratensis, and the celebrated British musician Stephen Layton brought his wealth of choral experience as conductor.

Thanks for the Promos of Missa Unitatis. When I play this on the ACDA Radio and ChoralNet I will let you know. Sometime After Easter. Thanks so music. Stanley Schmidt Going Beyond Words www.goingbeyondwords.com did this come from the composer, Challenge Records, or Mr. Pitts? Stan Schmidt, Host Producer Going Beyond Words 3214 West Zephyr Pl #1 Sioux Falls, SD 57108

Netherlands Chamber Choir (orchestra)More information
Nationaal Vrouwen Jeugdkoor (orchestra)More information
10-04-2019 Music Web
"Missa Unitatis is a splendid work, superbly written for voices. It will appeal to any choral music lover looking for something a little out of the ordinary."
30-07-2018 Kerk & Leven
"Lovers of choral music will certainly love this CD."
20-04-2018 Gramophone
"The combined forces of the Cappella Pratensis and Nederlands Kamerkoor impart plenty of zip and energy to these performances, to which should also be added impressive contributions by the Netherlands Female
Youth Choir in music by Poulenc, Verdi and Eriks Esenvalds."

03-04-2018 Kerk & Leven
"Lovers of choral music will certainly love this CD."
31-01-2018 Scherzo
"To the full success in the election and sequencing of the program is added the superb performances of all the choirs. The Missa Unitatis stands out because of its size: it is a marvelous work full of enchantment, soul, depth and color. The Cappella Pratensis and the Netherlands Kamerkoor astonish equally with their virtuosity and musicality in abundance, in a throbbing performance that elevates the listener from beginning to end. An anthological album, without a doubt."
19-01-2018 Luister
"Music to crawl into, if you just want to stop the daily fuss."
23-11-2017 VPRO Vrije Geluiden
"Impressive new choral music by Antony Pitts.
An album that shows in an impressively beautiful way that choral music is current and of all times."

Tom Klaassen explores the limits of classical music every Saturday and Sunday between 11 pm and midnight. With new releases, concert tips, reports, current developments in the music world, a permanent place for young talent, and of course: breathtaking music! Tonight include the new CD by Cappella Pratensis and Nederlands Kamerkoor with the Missa Unitatis by the British composer Antony Pitts.