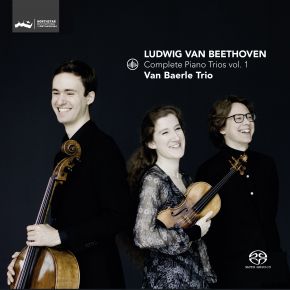 Beethoven’s primary reason for settling in Vienna in 1792 was to study with Joseph Haydn, who at the time was widely considered the greatest living composer. Beethoven’s three Piano Trios op. 1 were the first compositions that he deemed important enough to give an opus number. They were dedicated to Prince Karl Lichnowsky, a patron of Beethoven in whose house he lived for some time. According to Beethoven’s lifelong friend Ferdinand Ries, Haydn was complimentary about the set of trios. The trios combine various elements that would have been familiar to Beethoven’s contemporaries. Less familiar, however, would be the fact that the trios contain four movements rather than the three that had been traditional in this genre. Although changes from major to minor had been common in the music of previous generations, where they would normally apply to just the last chord, Beethoven employs this technique more extensively here than was probably common at that time.

Much like op. 1, the Trio op. 11 is also connected to the Viennese nobility of the time. Beethoven cleverly dedicated it to Maria Wilhelmine Countess of Thun-Hohenstein. In other ways, too, Beethoven tried to make this a particularly attractive publication for the Viennese public: the trio could be performed with a clarinet instead of a violin, a flexible approach to instrumentation that would doubtless increase its marketability. In addition, the last movement consists of a theme from Joseph Weigl’s comic opera L'amor marinaro, followed by a series of variations. At the time when Beethoven wrote this trio, Weigl’s opera was very popular in Vienna.

This recording was made using a Chris Maene Concert Grand built in 2017.
This remarkable instrument combines the knowledge and materials used in modern piano building with those found in older historical instruments. The most striking feature is that unlike in modern grand pianos, in which the strings in the bass and middle registers cross, in this instrument all strings run parallel to each other. As a result, it combines the solidity of a modern concert grand piano with the transparent sound ideal of older instruments. The sound of this symbiosis of old and new was a source of inspiration during the recording of Beethoven’s Piano Trios.

Hannes Minnaar (featured)More information
26-10-2018 MusicWeb international
"The three performers play their instruments perfectly well."
10-07-2018 Trouw
"The only time I put my car aside to listen to the radio better was when I heard this trio, they played collectively, from one thought, that everything came together.The sum of these three different spirits is not three, but five or six."
21-06-2018 Stretto
"Enjoy the perfectly balanced interplay of these three top musicians, that Beethoven's pronounced, classical style of the past, with warm phrasing, rhythmic contagion, motivic profiling, mischievous charm and warm poetry, sonorous. Beautifully played."
23-05-2018 Kerk & Leven
"On this CD they play brilliantly, full of tension and yet always balanced."
04-04-2018 Kerk & Leven
"In this way, the young van Baerletrio shows how the historical performance practice has completely matured. We are already looking forward to the following CDs."
02-04-2018 Gramophone
"Sparkling performances: the Van Baerle Trio impress in Beethoven piano trios."
29-01-2018 Scherzo
"The Van Baerle trio is exceptionally brilliant. This integral should be their PhD, and from what we have heard, it could be cum laude"
26-01-2018 De Volkskrant
"Yes really. Milstein is that good"
26-01-2018 Preludium
"Things are going well with violinist Maria Milstein. In addition to her success with the Van Baerle Trio, her solo career has not gone unnoticed."
19-01-2018 Luister
"Maria Milstein wins Dutch music prize."
19-01-2018 Luister
"The Van Baerle Trio plays Beethoven's piano trios almost in consultation with the listener ... ... astonishingly unanimous
"

19-01-2018 Luister
"Right from the start of the First Piano Trio in E flat major it's absolutely spot on. Playful and virtuosic, as all fast movements and nicely understated in slow."
18-12-2017 Opus Klassiek
"The best of the best, that briefly summarizes this intensely musical 'kick-off' of what will be the integral cycle of Beethoven's piano trios by the Van Baerle Trio in a while. If it continues at this high level, it is a project that can only be properly defined with the concept of 'top production'."
15-12-2017 De Volkskrant
"The Van Baerle Trio is so charming and always in excellent balance. The trio is at its best when the notes ask for a melancholic touch."
06-12-2017 NRC Handelsblad
"New gadgets make young Beethoven sparkle."
04-12-2017 Pizzicato
"

Vivid and spontaneous performances, promising another excellent complete recording of Beethoven’s Piano Trios. The highlight on this SACD is the mesmerising and breath-taking Adagio from Opus 11.

"
15-11-2017 HRAudio
"An excitingly crafted, well balanced reading. In short: They got it just right! A most promising debut of a projected complete cycle. And what’s more: Thus far not available in hi-resolution."