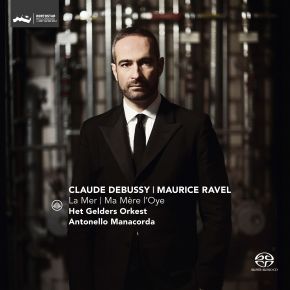 The bulk of La mer was composed during a visit to Burgundy – a long way from the nearest sea – although the work was completed in the English seaside town of Eastbourne. The composer himself argued that his inspiration was drawn from a range of ocean view paintings and from literature in which the sea played a major part. Debussy described the work as 'Three symphonic sketches for orchestra' (Trois esquisses symphoniques pour orchestre), thus avoiding the term 'symphony', which would have imposed a specific musical structure, as well as the expression 'symphonic poem', which would imply that the music was descriptive in nature. 'Sketches' was a wise choice, precisely because it neatly conveys that the music is meant to do no more than provide an impression.

Whereas Debussy occupied himself spontaneously and intuitively with looking for new sounds, Ravel placed much more emphasis on the effect that the sounds could have in the context of a musical story.

One of these dazzling impressionist tales was the suite Mother Goose (Ma mère l’Oye). Between 1908 and 1910, he wrote a simple suite of piano pieces for four hands for the children of some friends, inspired by a few fairy tales that he took in part from the Tales of Mother Goose by Charles Perrault. Albeit the music was not technically difficult, the subtlety of the sound and melodies imbued the work with extreme refinement. This became clearly evident when he subsequently arranged to work for orchestra, refining the music even further with the larger orchestral sound palette. Ravel used this orchestral version in 1912 for a ballet.

Het Gelders Orkest (orchestra)More information
02-07-2018 Fanfare
" It’s a good performance. It’s moderately paced and clearly recorded."
09-03-2018 Luister
"Because of the tension that Manacorda builds, I have been listening to bated breath from the very first moment ... This recording is a must!"
02-03-2018 De Volkskrant
"The Gelders Orchestra plays Debussy and Ravel on the brink of sublime."
17-01-2018 De Groene Amsterdammer
"This Manacorda is a amazing good conductor."
08-12-2017 HRAudio
"Spectacular recording."
06-12-2017 Pizzicato
"

"
01-12-2017 Amadeus Magazine
"Born in Turin and European by vocation, Antonello Manacorda is an important conductor that Italy has exported in the international scene."
30-11-2017 Opus Klassiek
"That this conductor understands this music is also apparent from the fact that he does not do the subtleties oversubtly or too businesslike, but treats them as structural factors."