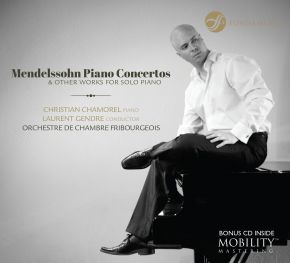 The art of Mendelssohn, the Mozart of the 19th century according to Schumann’s perspicacious yet deceptive expression, stubbornly eludes categorisation. Its lightness, transparency and elegance combine classicism and romanticism; together with the previous elements, its fervour, drama and exaltation define a remarkably rich, multi-faceted body of work.

The two piano concertos Mendelssohn composed when he reached his artistic maturity (at the age of 16, with the impressive String Octet op. 20) are less frequently played nowadays than those of Chopin, even if they are, in many respects, probably superior