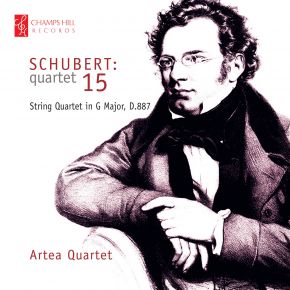 The members of the Artea quartet met whilst studying at the Royal Academy of Music in London in 2001. After studies with the Amadeus, Alberni and Wihan quartets they went on to forge a successful career, winning many awards and performing at festivals throughout the U.K. including the BBC Proms, and at venues such as the Wigmore Hall and Purcell Room as well as live broadcasts for BBC Radio 3.

With busy solo and orchestral careers, this new recording represents a rare opportunity to hear them in the studio, and the repertoire reflects their desire to take on a challenge: one of the summits of the repertoire, Schubert’s last great String Quartet in G major, No 15. "It is a piece of such enormous scope and exquisite beauty that it is an intimidating peak of the repertoire to scale. It is a sobering thought that Schubert was the same age as us, if not slightly younger, when he composed it.” It was published posthumously in 1851.