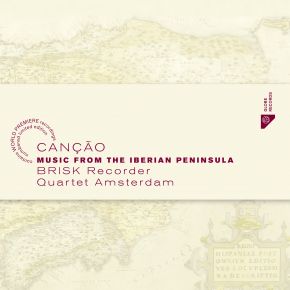 Igor Stravinsky once said, “The only fitting comment on a piece of music is another piece of music,” and this thought has also fascinated BRISK, the only remaining recorder quartet in the Benelux, for many years. Through the ages, compositions have been arranged for different instruments, embellished, or used as a source of inspiration to write entirely new pieces. Putting early music in new settings is an essential part of BRISK’s identity. The quartet has made many transcriptions and arrangements of both vocal and instrumental compositions, and often writes its own elaborate diminutions for existing pieces. Modern composers have been invited by BRISK to write a musical comment on a certain style or composition. All these things can be heard on this album with music from Spain and Portugal.

The music reflects many different stylistic periods, from the end of the 15th century until today, and illustrates the influence of the different cultures which left their traces in Spain and Portugal. Hymns and chansons of the 16th century are combined with songs of a later date together with 21st century pieces inspired by fado and Sephardic songs.

Brisk Recorder Quartet Amsterdam (orchestra)More information
25-05-2018 Noordhollands Dagblad
"Binding is the quality of all the sometimes 'deafening' pure music."
18-05-2018 Luister
"A whole CD, over an hour of playing time with only recorder music - that has to come from a good house to keep the attention. The Bisk Recorder Quartet Amsterdam comes from a good home!"
23-04-2018 NPO Radio4
"With music from the Iberian Peninsula. Spanish and Portuguese. But Brisk also explores borders ... It produces a cool CD with countless different tracks ..."
28-03-2018 Opus Klassiek
"An 'awake' CD that deserves all attention!"