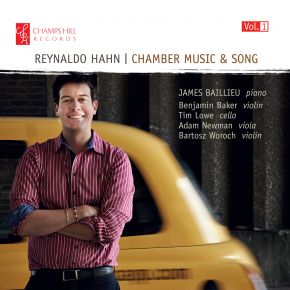 Regarded as a French composer, Hahn was actually born in Venezuela, returning to Paris at the age of three and showing a prodigious talent for music – entering the Paris Conservatoire aged just ten to study composition with Massenet and Saint-Saëns - and like his teachers, he worked in a strongly melodic and tonal idiom.

The main works here are a Piano Quartet and a Piano Quintet. His Quintet of 1921 has an arresting opening, with fluid piano writing and idiomatic and effective writing for the strings. It is a hugely underrated work in the repertoire. The Quartet is a very late work (1946) and smaller in scale than the quintet, but nonetheless a substantial and robust piece. The melodies are included in Hahn’s own instrumental transcriptions.

Described by The Telegraph as ‘in a class of his own’ pianist James Baillieu has been the prize-winner of the Wigmore Hall Song Competition, Das Lied International Song Competition, Kathleen Ferrier and Richard Tauber competitions. He was selected for representation by Young Classical Artists Trust (YCAT) in 2010 and in 2012 received a Borletti- Buitoni Trust Fellowship and a Geoffrey Parsons Memorial Trust Award. In 2016 he was shortlisted for the Royal Philharmonic Society Outstanding Young Artist Award.