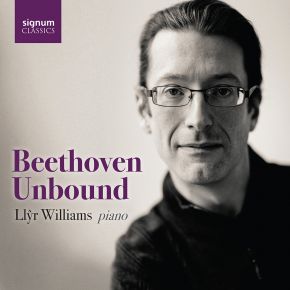 A stunning 12-CD box set, Beethoven Unbound, will be released to mark the completion of Llŷr Williams’ monumental Beethoven cycle at Wigmore Hall and the Royal Welsh College of Music and Drama (RWCMD) – recorded live at Wigmore Hall over three years and nine recitals.

As well as the complete piano sonatas, the box set also features other works including the 32 Variations in C minor, Eroica Variations, Opus 126 Bagatelles and the Diabelli Variations, a total of almost 14 hours of music. This is Williams’ fourth album on Signum Classics. Beethoven Unbound is presented in a beautiful hinged box with extensive notes by Misha Donat, and personal notes by Williams and the album’s award-winning producer Judith Sherman, with whom Williams worked previously on his Wagner Without Words release.

Williams comments on the box set and the partnership with Sherman: “Rather than adopt the chronological approach, I have arranged the works roughly in the order that I played them in the concerts, and each CD has been devised as a mini-recital programme. This has sometimes allowed for creativity in putting the pieces together. Working with Judy on this project has been a joy and a privilege. It was sad to reach the end – but at least we still have a Schubert cycle to look forward to!”

Williams has developed a reputation as one of the finest exponents of Beethoven, since giving his first Beethoven cycle in Perth in 2010, and winning a South Bank Sky Arts Award in 2012 for an epic two-week marathon in Edinburgh. The Guardian said of one of his RWCMD cycle recitals in 2016: “Williams’ already considerable stature as a Beethoven interpreter seems to grow with every performance” (Rian Evans, 25 March 2016) and The Independent commented on a Wigmore recital: “Williams treats it [the keyboard] as an extension of his body, and with the three Opus 10 sonatas plus the Diabelli Variations he took us onto an altogether higher plane” (Michael Church, 12 October 2016). 2017 saw the conclusion not only of the solo series at Wigmore Hall and the RWCMD, but also of a complete concerto cycle with the Scottish Chamber Orchestra.