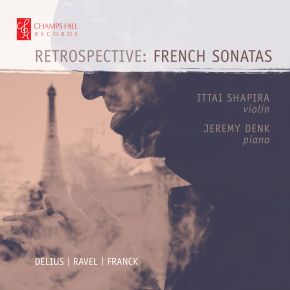 Available for the first time on Champs Hill Records, violinist Ittai Shapira’s 1999 disc was recorded in the Music Room at Champs Hill and initially released on the Quartz label.

Bringing together sonatas by Delius (Op Posth), Ravel (No 2 in G Major) and Franck (A Major), Shapira was fascinated to explore what “french’ sound really meant to him, along with pianist Jeremy Denk.

Shapira says " While heavily associated as part of the French repertoire, each piece has its own distinct sound, while integrating influences and reaching to other cultures: Blues, Gamelan, and British. A distinct sound that stays in one's memory while bridging cultures is what I aim for to this day, 17 years after recording these works, both as performer and composer.”