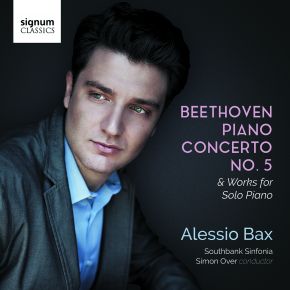 Alessio Bax returns to disc on Signum with the Southbank Sinfonia under Simon Over, in a new recording of works by Beethoven centred around the majestic “Emperor” Piano Concerto No. 5.

Combining exceptional lyricism and insight with consummate technique, Alessio Bax is without a doubt “among the most remarkable young pianists now before the public” (Gramophone). He catapulted to prominence with First Prize wins at both the Leeds and Hamamatsu International Piano Competitions, and is now a familiar face on four continents, not only as a recitalist and chamber musician, but as a concerto soloist. He has appeared with more than 100 orchestras, including the London and Royal Philharmonic Orchestras, Dallas and Cincinnati Symphonies, NHK Symphony in Japan, St. Petersburg Philharmonic with Yuri Temirkanov, and the City of Birmingham Symphony with Sir Simon Rattle.

Alessio has appeared frequently with the Southbank Sinfonia in concerts and recordings – their 2013 disc of Mozart’s Concertos Nos. 24 & 27 was described by Musicweb International’s critic as their “Recording of the Month … and quite possibly my recording of the year”. A live concert of the “Emperor” concerto in 2016 with the orchestra in Tuscany’s Incontri in Terra di Siena festival was met with praise by reviewers:

“[Bax’s] capacity for softness and for evenness of touch came beautifully to the fore for the concerto’s many top-keyboard pianissimo flutterings, as his strong relationship with the orchestra also reaped dividends, producing satisfyingly sympathetic chamber pockets amidst the surrounding symphonic excitement.” Bachtrack (Live Concert Review)