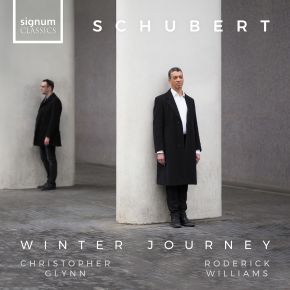 Schubert’s Winterreise (D.911), in an English version by Jeremy Sams

Celebrated soloists Roderick Wiliams and Christopher Glynn perform a new English translation of Franz Schubert’s Winterreise. Composed in 1827 whilst in the grip of the illness that would ultimately kill him, Schubert’s setting of Wilhelm Muller’s poetry takes on an added tragic interpretation as it follows the narrative of a spurned lover travelling through a cold and barren landscape.

“We hope this Winter Journey can offer English-speaking listeners a way to experience the story’s sense alongside the music’s sound, with something of the same directness that Schubert surely intended when he sat down at the piano in 1827 and sang these songs for the first time to his friends.”

This disc is the first in a series of three English language programmes of Schubert’s song cycles. Future releases include The Shepherd on the Rock (Der Hirt auf dem Felsen) and The Fair Maid of the Mill (Die schöne Müllerin).

I heard Roderick Williams sing the Winter Journey last night in Oxford and have rarely been so deeply moved. He is a consummate artist who has let me see that this version has such an immediacy to an English speaker, much as I am used to hearing it in German. From the bottom of my heart, thank you. I will never forget the look on his face as he sang about the hurdy-gurdy man. I was in tears.