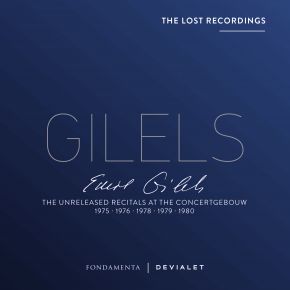 « In June 2017, I was due to perform in Moscow when I met Kirill Gilels, the grandson of the famous pianist Emil Gilels. He listened to what our Phoenix Mastering restoration process, based partly on Devialet technologies, can achieve, and made the decision to entrust us with the results of several years of research: he gave us a list of dates and places of the previously unreleased recordings of his grandfather.

In Berlin, Moscow and Saint Petersburg, we came across a treasure trove, stunning in terms of both the quality and consistency of Emil Gilels’s playing. We were fully aware that he was one of the greatest musicians of the twentieth century.

It was in Amsterdam where at last, thanks to the unstinting efforts of Piet Tullenaar, we succeeded in extracting five recordings of performances Gilels had given between 1975 and 1980 at the Concertgebouw – recordings that had fallen into oblivion.

We were allotted a studio where we listened to the tapes one by one. Sitting there were Piet Tullenaar, Michel Navarra and myself. We did not utter a word, so overcome were we by the beauty of what we heard. (F. D’Oria-Nicolas) »

=Here is, in a few words, the feverish atmosphere that surrounded the genesis of this totally new box set dedicated to Emil Gilels (1916 - 1985). Considered one of the most important pianists of the twentieth century, he was a pupil of H. Neuhaus. He wins the current Queen Elizabeth Competition in Brussels and takes on an international stature. In 1955, he was the first artist to be welcomed in the United States since the war : if the public, somewhat circumspect of Carnegie Hall, in New York, accompanies his entry on stage of a troubled silence, it is under a thunder of uninterrupted applause that he will refuse to leave the stage!

His record work is important (more than 55 ref are still available), so finding unreleased recordings is an event.

Gilels was particularly fond of Holland, and gave the best in these recitals at the Concertgebouw in Amsterdam. It is in his favorite repertoire - Beethoven, Brahms, Chopin, Prokofiev, Schumann, etc - that we find this legendary pianist, in this box of recordings from 1975 to 1980.

The winners of Edison Classical 2018 are announced! These prestigious prizes go to albums of a special quality. This Sunday, November 11, some of the Edisons will be handed out during the live broadcast of Podium Witteman on NPO2. We proudly present the winners of our distribution labels: The Debut Laura van der Heijden (Prokofiev/Shaporin e.a. – Russian works for cello and piano) – New Arts International, Champs Hill Records Jury: "It is ...

Maurice Ravel (composer)More information
20-12-2018 De Volkskrant
"They threatened to escape the music memory, the recordings made by the Russian master pianist Emil Gilels in the Amsterdam concert hall: the Concertgebouw. His game is intelligent, enthusiastic and compelling, and this grandeur is thundering like a thunderbolt in clear skies."
22-11-2018 NRC Handelsblad
"Recently discovered recordings of five Amsterdam recitals by the phenomenal master pianist Emil Gilels - diverse repertoire 5 CDs long superior, intelligent and colorful."
05-10-2018 Crescendo
"Most stunned and enchanting to this day is Gilels' somnambulistic stylistic sense and dramatic power in Mozart."
03-09-2018 Fono Forum
"Gilels at his best!"
20-07-2018 Luister
"Cum Laude...  Unforgettable recordings from an exceptional pianist."
20-07-2018 Luister
"Listen to his Beethoven interpretations (one of his hearths): technically flawless, lively, a playtime that reveals great insight into the notes, and when a melodious melody passes by is refined, colorful, and extremely sensitive."
11-06-2018 Süddeutsche Zeitung
"A condensate of his pianistic world view."
08-06-2018 Mania
"Five CDs, you can enjoy the breathtaking playing of Emil Gilels."
04-06-2018 RBB-Kulturradio
"An epochal set, because you won't meet the ripe one, later Gilels nowhere more lively, almost casually than here."
25-05-2018 Trouw
"Gilels in optima forma, never making a mistake, playing compellingly, with noble perfection and great overview."
24-05-2018 De Volkskrant
"Stunning good recordings of Emil Gilels (1916-1985) in the Concertgebouw (*****)"
30-04-2018 Opus Klassiek
"While listening to these recordings that belong to the best I know of Gilels, I regret that I have never heard him in person."
27-04-2018 Het Parool
"Fireworks in which his pearling game sounds like something from the past. Who else can do this?"
25-04-2018 NRC
"The golden tone of this profundity resounds during live recordings of the five recitals that "the little giant" played in the Amsterdam Concertgebouw between 1975 and 1980."
04-04-2018 De Nieuwe Muze
"These recordings tell the fascinating story of an incredibly honest interpreter who could move mountains if he exceeded his self-imposed boundaries."