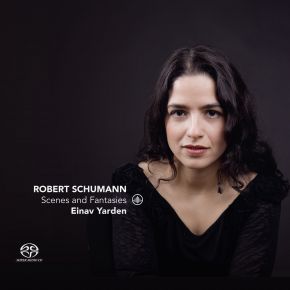 The three works on this CD span a period of fifteen years – years in which the young Schumann suffered forcible separation from his beloved Clara, followed by their marriage and a brief period of relative calm, to the increasing bouts of mental instability which were to close him off from the world around him until his death.

The piano Fantasiestücke op. 111 was composed in 1851 during a time of deteriorating mental health and increasing disillusionment with his post as Music Director of the Düsseldorf Music Society. In contrast to the youthfully extrovert Fantasiestücke op. 12 of 1837, these three untitled pieces are “of a serious and passionate character”, as Clara described them, their bold harmonies intensifying their expressivity.

The Fantasie in C major op. 17 is one of Schumann’s most powerful large-scale piano works, composed during the bitter period of his enforced separation from Clara.

Schumann completed his cycle of nine forest piano miniatures, Waldszenen, in 1849, while struggling with increasing bouts of mental instability and depression. Each piece is headed by a descriptive title. These masterly tone paintings display Schumann’s genius in creating miniature images consummate in expression, characterisation and mood.

About Einav Yarden’s previous recordings on Challenge Classics:
“She pairs Beethoven with Stravinsky to striking effect, merging that unlikely couple with imagination and exceptionally vivid playing.” – The Washington Post

Robert Schumann (composer)More information
22-02-2019 ARTAMAG'
"Decidedly, this pianist is a poet."
07-09-2018 Piano News Magazine
"She executes these pieces with such depth and panache that it’s impossible not to listen with bated breath. Einav Yarden is a captivating pianist with a clear vision and a wonderful, convincing sound."
07-09-2018 Diapason
"

It should be emphasized that, on the threshold of this admirable and splendidly recorded piece, Fantasiestücke op. 111 sound as strange, enigmatic, fleeting and sombre as they should be.

She illustrates long, elegant musical lines, and in fact, the measuredness of her expression and sensitivity of her pianistic colors, emphasizes the wealth of imagination and unique magic of the pieces...

"
01-07-2018 Amadeus Magazine
"Yarden always shows her intelligence in repertoire choice, besides the indisputable qualities as a pianist. This record turns out to be especially close to her for stylistical kinship and deep understanding of the compositions."
15-06-2018 Fono Forum
"Poetry, passion, intimacy - these are terms that Einav Yarden likes to use in connection with Schumann, bundled in the generic term: the 'Fantastic"
15-06-2018 Fono Forum
"In Einav Yarden's way of playing Schumann, the vocal is always in the foreground"
08-06-2018 Mania
"In all the capricious passages, as a result of Schumann's great mood swings and depressions, she manages to guard the long lines in the music with her controlled play, while in the serene and the more light-hearted moments she takes the time everywhere."
06-06-2018 De Standaard
"The interpretation of the young Israeli pianist Einav Yarden lies in the right center between words, pathos and ethos… she fancies fancifully over the keys…”."
04-06-2018 HRAudio
"Yarden proves once again being amongst the best pianists around, delivering here an attractive, well balanced recital. [...] A deeply moving account."
27-04-2018 De Volkskrant
"Her new Schumann CD is a jewel. Yarden not only paints Schumann's free spirit, she can also handle the delusions of his later years."
26-04-2018 De Volkskrant
"4**** Her new Schumann cd is a gem. Yarden not only paints Schumann’s free spirit very accurately, but also handles the delusions from his later life extremely well."
12-04-2018 Stretto
"The new Schumann CD of the Israeli pianist Einav Yarden for Challenge Classics. Heavenly!
Her technique and acclaimed piano playing, at times vigorous and articulated, at times soft and intimately poetic, are here (again) expressed wonderfully."