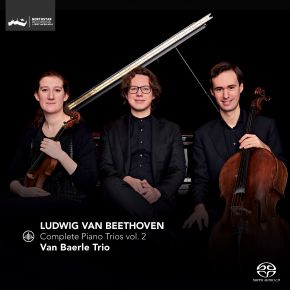 Chamber music arrangements of symphonies were very common in the late 18th and early 19th century, and it is probably true that a large proportion of the people who were familiar with the symphonic repertoire at the time were so because of them. The Second Symphony is the only one for which Beethoven himself produced an arrangement, although there is evidence that his student Ferdinand Ries did the bulk of the work, with Beethoven adding the finishing touches.

Of the three piano trios published under op. 1, the second announces its pretentions to the symphonic genre earlier than its siblings and has several common points with the Second Symphony that was written ten years later.

The Allegretto in E-flat, Hess 48, probably was one of the first works for piano trio that Beethoven wrote, dating back to the early 1790s. Its form is a short, but humorous conversation between three different instruments.

Maria Milstein (featured)More information
05-10-2018 Luister
"Luister 10: The catchy themes combined with the intelligent playfulness of the Van Baerle, elicits a smile even on the grayest afternoon"
13-08-2018 Pizzicato
"

For their second release of Beethoven’s Piano Trios the Van Baerle Trio has chosen the second trio from opus 1 as well as a small Allegretto, which probably was intended to be part of an Opus 1-Trio. The highlight is the trio version of the Second Symphony, which was transcribed by Ferdinand Ries and amended by his teacher Beethoven. This reduction shows even more than the original work how the composer pushed boundaries. The Van Baerle Trio does a brilliant job to illustrate this.

"
13-07-2018 De Volkskrant
"It's really good if you manage to suggest an orchestra as a trio, even better if you do not want to hear an orchestra anymore. Of that order is this execution."
10-07-2018 Trouw
"The only time I put my car aside to listen to the radio better was when I heard this trio, they played collectively, from one thought, that everything came together.The sum of these three different spirits is not three, but five or six."
09-07-2018 Opus Klassiek
"What stands are the eminent interpretations by the Van Baerle Trio and again the excellent recording of Bert van der Wolf, which also in 'normal' stereo is not to be sneezed. Now on to part 3!"
28-06-2018 AVROTROS
"New Classical: Beethoven's symphonic 'piano trios' by the Van Baerle Trio."
22-06-2018 Trouw
"*****
This is a CD that evokes more admiration every time you listen to it. The Van Baerle Trio became so good since violinist Maria Milstein, cellist Gideon den Herder and pianist Hannes Minnar united at the conservatory in 2004."