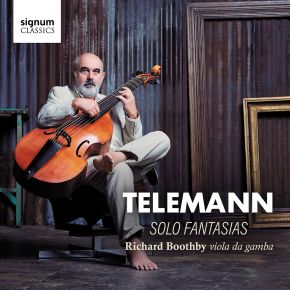 One of the greatest discoveries of the 21st century for the early music world, Telemann’s 12 Fantasias for Viola da Gamba were considered lost until the discovery of an original print in a private collection in Germany in 2015. Perhaps some of the composer’s finest work for solo instrument, they are described by soloist Richard Boothby as being “... by turns virtuosic and expressive, Telemann uses all the techniques of the instrument to create satisfyingly complete Fantasias that are full of diversity.”

One of the UK’s leading exponents of early music, Richard Boothby founded the Purcell Quartet in 1984 was a founder member of Fretwork in 1985. Since then his career has been bound up with these two groups with whom he records and tours; and through whom he plays the broadest range of repertory for the instrument from the earliest music to the latest contemporary music commissioned for viols.