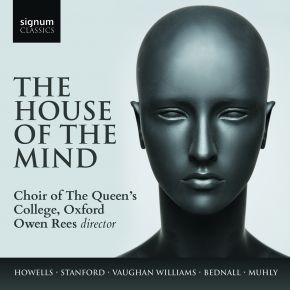 The Choir of The Queen’s College, Oxford celebrate the works of choral music icon Herbert Howells in a disc that sets his works alongside pieces that they inspired and influenced – such as Nico Muhly’s Like as the Hart for choir, solo violin and percussion – as well as works that in turn influenced him. The disc features two world premiere recordings by David Bednall: settings of two Marian antiphons Alma redemptoris mater and Ave regina caelorum that ‘complete’ the partly-lost set of works that Howells wrote for Westminster Cathedral.

Led by their director Owen Rees, the Choir of The Queen’s College, Oxford is among the finest and most active university choirs in the UK. Its wide-ranging repertory includes a rich array of music from Renaissance and Baroque masterpieces to contemporary works, including commissions. Their recording of David Bednall’s Christmas work Welcome All Wonders was met with critical praise:

“An excellent disc: the singing is incredibly tight, in the manner to which it has become increasingly accustomed under its musical director, Owen Rees, and Bednall’s writing is ingenious, embedded in a profound understanding of the workings of the choir and organ – both as distinct entries and as a partnership.” Gramophone