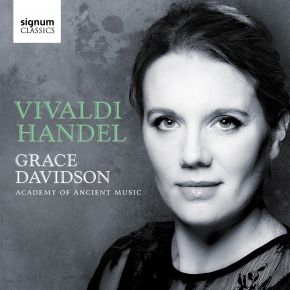 Signum Records are proud to present the debut orchestral recording from Grace Davidson, one of the UK’s leading British sopranos specialising in Baroque music. She is joined by some of Europe’s leading Baroque musicians from the Academy of Ancient Music to perform a selection of works by Handel and Vivaldi, with performances led by violinist Bojan Čičić under artistic director Joseph Crouch.

Grace won the Early Music Prize while studying singing at London’s Royal Academy of Music. Since then, she has worked with the leading Baroque ensembles of our day, singing under the batons of Sir John Eliot Gardiner, Paul McCreesh, Philippe Herreweghe and Harry Christophers. Her discography includes a decade of albums with The Sixteen, many of which feature her as soloist – Handel’s Jeptha (as Angel), Dixit Dominus, Monteverdi’s Vespers of 1610, Pianto della Madonna, and the Lutheran Masses of Bach.