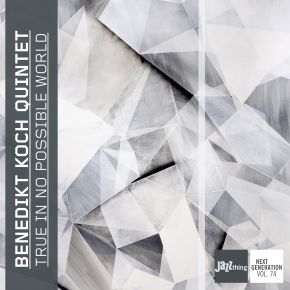 True in No Possible World

What an unwieldy title! "True In No Possible World" is the motto of the debut CD of the saxophonist and composer Benedict Koch, and everyone wonders what he really means. The term originates from modal logic, a branch of the logic that deals with the consequences of the modal terms "possible" and "necessary". As a result, you can not only derive secure statements such as "It is raining" or "All circles are round” from modal logic, but also such theses that question them in principle: "It is maybe raining" or “All circles are necessarily round". Confusing? Possibly. But Benedict Koch is less interested in a deeper meaning, with which his music could be analyzed and lifted to an intellectually higher level. "I chose this sentence above all because it fits phonetically to my music," the 30-year-old gave the answer to the riddle in an amazingly simple way.

In a book by American writer and philosopher David Foster Wallace, he simply searched for suitable topics when it came to giving a face to his CD debut for the 74th release of Jazz thing Next Generation series. However, you should in no case make the mistake at this point of considering the eight pieces from his pen with names such as "Glowing Carefully", "Stuck In Samsara”, “See The Years Passing By”, “Lichtung” or “Phosphor” as overly complicated, hard to digest or even try to understand them mathematically in a convoluted way. Instead, the opposite is the case. Koch has created an album full of facets, mild shimmering colors and finely regulated feelings of melancholy all the way to cautious joy with his new quintet with the drummer Fabian Arends, the bassist Reza Askari, the trumpeter Matthias Schwengler and the pianist Felix Hauptmann. "My roots are clearly in the jazz tradition," the musician said, who was born in Darmstadt, studied jazz saxophone from 2009 to 2015 at the University of Music Franz Liszt in Weimar, graduated with the highest grades in 2015, made a name for himself previously as a member of the Hessian State Youth Jazz Orchestra as well as a prizewinner at the national competition "Jugend Jazzt" and now lives in Cologne as a freelance musician. "But at some point I noticed that I could not find myself emotionally."

Consequently, I searched for and found Benedict Koch, what is commonly called one’s own identity. The fact that this moves back and forth between past jazz epochs (which is also manifested in the front wind section with tenor sax and trumpet) and impressionist influences is due not the least to his congenial partners who move confidently and dream-like with him in all areas. "I really get along fantastically with them as individuals. Because I am rather sensitive, I have to feel at home in such a band structure to be able to express myself adequately."

As a result, improvisations and the narrative moment of melodies are clearly in the foreground. The sound is modern, but tangible and comprehensible at all times; the playing of the rhythm group grooves, but can suddenly begin to float spherically from one second to another. Especially things that affect his life serve as an inspiration for the exceptionally talented musician: the impressions of big city life, mathematical formulas, a painting or a political event. "If I only lingered in the world of music, then I would quickly get a feeling as if I would turn in circles. That’s why I need this input from outside." Perhaps the philosopher's stone. And a surprisingly mature, unusual, exciting music results from this that fits exactly into this possible world.